Texas and the southern plains are back in a drought. Just last spring, we were literally under water. Some regions are becoming severe while others are just dang dusty. 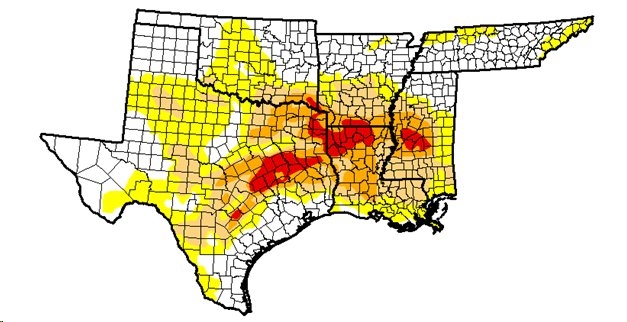 Unfortunately, the drought is hitting southern plains bison herds at the worst time of year for health and reproduction. Some bison will be resilient on their own, while others will depend on the human element for health.  This year what’s happening is a perfect storm for causing unhappy bison producers for the following reasons.

1] Excessive rains [understatement] in the spring propelled excessive parasites in the habitats. We had lush – tall – green and an accelerated cool season explosion that carried with it, an accelerated explosion of parasites to the bison.

2] Immediately following the flooding, we had drought – heat – slow starting warm season grasses because of cool-season shading, then weak plants dealing with everything from root necrosis to no moisture.

3] Herds that this scenario fits are potentially wrapping up the breeding season in a low nutritional regime, potentially parasite laden cows and low body scores going into winter which is the polar opposite of functional.  Bison are the great survivalists, and will survive, but that’s about all they will do if your conditions are not optimum. Conversely, and like clock-work, the opposite is true.

If you are reading this, and you feel like the negative scenario fits your situation, you still have time to react and balance a very un-balanced system to the benefit of herd- health and the economics of your model.

1] Carefully step away from the cliff, there is hope.

2] Ascertain the actual nutritional regime by testing your grasses. Different grasses behave differently such as native-range vs. improved [exotic] pastures.

3] Make sure you have an adequate mineral program

4] Run fecal analysis on your herd and only trust low-count results, as opposed to zero-count.

5] React to your findings immediately – there’s still time to correct and cause a positive outcome for the next calving season.

What you learn this year about your herd and their habitat will become valuable to you in future years, possibly even this next coming year according to meteorologists. It’s always good to have a plan and always good to have that plan be based on accurate information as opposed to guesses.  Find ways to facilitate the herds’ ability to [communicate] to you about what they need.  Perceive supplementation as an investment, within a budget, and analyze the return-potential compared to not investing and low production. Finally; for all in the southern plains who have been through previous droughts

6] Make sure your boat-payments are current!!