Ron Brownotter, is such a person and proud owner of his herd. Coming from a cattle background and always wanted buffalo, he worked and studied and through hardships and perseverance made his life long dream reality.
Brownotter Buffalo Ranch on the Standing Rock Indian Reservation sprawls over 20,000 acres, home to a herd of 600. His herd is part of a buffalo resurgence at Standing Rock that also includes native herds owned by the tribe and others. (source)

“I’m raising buffalo because I’m a Lakota-Yanktonai person on Standing Rock,” he said. “We’re surviving here. It’s who we were and who we are.”

The Standing Rock Reservation is in North Dakota and South Dakota in the United States, and is inhabited by ethnic “Hunkpapa and Sihasapa bands of Lakota Oyate and the Ihunktuwona and Pabaksa bands of the Dakota Oyate,” as well as the Hunkpatina Dakota. 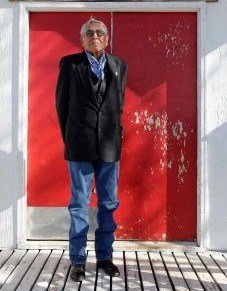 Photo By Chris Huber/AP In this Feb. 13, 2014 photo, Christ Episcopal Church Reverend Robert Two Bulls poses for a photo in Red Shirt Table, S.D. Bulls’ family has lived on the land near this church for years but the creation of a tribal national park here is threatening that.

The plan threatens the sanctity of sacred land near the Black Hills and the ranching way of life of the people who live there and have had land passed down through generations of their families, Robert Two Bulls told the Rapid City Journal (http://bit.ly/1gbmTGW ).

To members of the Lakota tribe, the bison (American buffalo) is a sacred symbol embodying both life and abundance. Its importance to them historically was immense, both in legend and everyday life.

“It provided us our shelter, our food, our weapons, our toys. We played with the toe bones, that we called bone horses, and we made the ribs into sleds,” says Charlotte Black Elk, a Lakota of the Pine Ridge Indian Reservation in South Dakota. “So it provided us with everything. And it’s also a spiritual connection…. It’s impossible to totally explain how important the buffalo is to us. The buffalo is life.”

Vast herds of bison have long since vanished from the Great Plains, and many other animal populations that once thrived there are struggling. Yet their cultural significance and role in the ecosystem remain strong.

Now, a restoration action supported by the BNSF Railway Foundation is helping Native Americans on the Pine Ridge Reservation expand their tribal buffalo herd. It’s also helping to re-establish the swift fox and black-footed ferret, which were once plentiful in the region. The effort is the first part of NFWF’s Northern Great Plains Initiative, which works to bring back native species and their habitats.

In phase one, the BNSF Railway Foundation is helping to underwrite a project by the World Wildlife Fund that will actively involve tribal members at the Pine Ridge and the Fort Belknap American Indian reservations (in South Dakota and Montana, respectively) in community conservation projects. Through the project, members are developing wildlife management plans to protect and restore bison and other wildlife, as well as the habitats they need. The plans also promote job creation and contribute to cultural and economic goals.

With a major operational footprint in the Northern Great Plains, BNSF Railway has taken an interest in conservation projects that benefit wildlife and their habitats, particularly in tribal communities. “The National Fish and Wildlife Foundation’s Northern Great Plains program is truly a unique approach of engaging tribes in South Dakota and Montana as wildlife and prairie stewards,” said BNSF Foundation President Zak Andersen.  “BNSF Railway Foundation is honored to support this program that will create widespread benefits for tribal communities, wildlife and the environment for future generations.”

“Tribal lands harbor some of the best remaining biodiversity in the Northern Great Plains,” explained Martha Kauffman of World Wildlife Fund. “WWF supports the vision and goals of our tribal partners to restore wildlife like bison and black-footed ferrets and all they represent for their people.  They are making a great contribution to the recovery of these species, and all of us are benefiting from their efforts.”

Other partners in the project include the U.S. Fish and Wildlife Service, the Bureau of Land management, the U.S. Forest Service and Wells Fargo.

(extract)
The star quilt, adapted from the Star of Bethlehem design found in Pennsylvania, seems to have become a reflection of Lakota society, both historically and in modern times. Like the painted buffalo robes made by women to be worn by men, star quilts are used today for momentous occasions or exchanged as gilts of honor. These quilts have become integrated into every aspect of Lakota life and are used whenever people hold celebrations perceived as traditional, including naming ceremonies, weddings, births, and basketball tournaments. It is also common to drape the coffin with a star quilt during a wake. Lakota women spend the whole year making star quilts for the traditional giveaways held by their people. A giveaway is a public way of honoring others, particularly relatives., Though introduced to the Lakota people from outside of their traditions, quilt making has become thoroughly embedded in Lakota life. Quilts, and especially those in the star pattern, are one of the definitive cultural symbols oi the Lakota people.’ The star quilt, made from raw materials initially traded for and now purchased from non-Indians, has become the singular piece of artwork that is a symbol of being Lakota in the modern world. Thus the traditional role of women as artists and craftsmen is still very important, as all Lakota people require an abundance of star quilts during their lifetimes.* In the early part oi the nineteenth century, military people, pioneers, gold seekers, and missionaries began to settle the domain of the Lakota people – what is now North Dakota, South Dakota and Montana. With the loss of their land and disappearance oi their food supply – the once vast herds of bison – Native people were placed on reservations and expected to forget their cultural, domestic, and religious traditions. It was the government’s desire to have the once nomadic, hunting Lakota oi the Plains become farmers on designated plots of land.
/
by Anne Marie Shriver
/
/
This Star Quilt was given to us, it was made by a Lakota women from the Pine Ridge Reservation.

/
/
Standing between darkness (ignorance) and light (knowledge), the morning star leads to understanding. Star patterns using natural plant dyes adorned hides and teepees. The symbol was interwoven within porcupine quill work and beaded patterns used on moccasins, leggings and clothing. When missionaries came in the mid to late 1800’s and introduced fabric and sewing to Native American women, the “Morning Star Quilt” was born. It replaced the traditional red buffalo robe and was displayed at their funerals as a means to honor and protect loved ones on their final journey through the stars. Its tradition of honor grew as the quilts were draped around the shoulders of their braves and hunters when they returned from battle or a successful hunt. Often the young men would wrap themselves in a quilt on their vision quests.
Read More
December 2004 Published by Indian Country Today.
Journey from Catalina Island to Rosebud
100 animals were taken off Santa Catalina Island last week amid fanfare and a ceremony. The ceremony included Morongo tribal members as well as Lakota spiritual leaders to send the animals off to South Dakota. After the ceremony, the animals were loaded onto a boat and taken to Los Angeles. Reached briefly on the road in Utah during the drive, Lenny Altherr, who with several Lakota tribal members oversaw the transport, said the animals were loaded into two trucks to make the 2,000-mile drive over sometimes icy winter roads. Skyhawk later confirmed that the animals made it safely to South Dakota on the morning of Dec. 17. Because of the genetic purity of the Catalina Island herd, the receiving tribes, the Cheyenne and Lakota, have agreed to use the animals only for breeding stock to reintroduce their genes and have promised not to slaughter the current generation of bison for this reason. Baer maintains that given the new understanding of size limits for the Catalina Island herd repatriation efforts of excess animals will be an ongoing project as the herd size on the island inevitably increases. “We plan to find a new partner tribe [in the Great Plains] probably in about three years. This is just going to be part of our management plan.”  (read more)