At Fort Dodge in April 1867, Major General Winfield Scott Hancock, then commander of the Department of the Missouri, which embraced Missouri, Kansas, Colorado, and New Mexico reminded several Arapaho chiefs, including Little Raven, of some hard realities.
“You know well that the game is getting very scarce,” lectured Hancock,” and that you must soon have some other means of living; you should therefore cultivate the friendship of the white man, so that when the game is all gone, they may take care of you if necessary.

“When we getting our buffalo?” people ask.

It’s a question J.T. Trosper, a burly man with a mustache and black ponytail, hears often these days. “It could be a while,” he responds. There are buffalo sources, fences and finances, to think about first.

In the spring of 2009, Trosper was certain the buffalo would come. But turbulent waters blocked the way.

Trosper, 45, works for the tribe, tasked with creating a plan for buffalo. He also serves on the board of the Intertribal Buffalo Council of Rapid City, S.D., which has helped many tribes with buffalo herds.

Trosper makes cell-phone calls, surfs the Web for buffalo facts, talks with officials and tribal members, all the while negotiating a way for buffalo onto Arapaho land. It has been talked about for nearly two decades; Trosper has come closest to making it happen.

Trosper operates with scant administrative tools. His office consists of a back-row seat at the Wind River Tribal College computer lab, or the driver’s side of his pickup.

The project, launched in 2005, examined possible latency of brucellosis in bison. A quarantine facility was constructed in Montana, and frequent blood tests monitored calves for the presence brucellosis antibodies. Those that cleared the rigorous process were ready for release in the spring of 2009.

A call went out to find the bison a home. Three tribes responded, including the Northern Arapaho. The Arapahos were deemed best prepared.

Fittingly, a buffalo range would be established on the Arapaho Ranch — in some ways, a remnant of America before Christopher Columbus.

By this point, ranch manager David Stoner says, wildlife officials expressed little worry about brucellosis, and he shared their confidence: “This was the cleanest group of ungulates in the country.”

Of greater concern were good fences to keep buffalo from wandering off the ranch.

Of course, the General Council, made up of Arapaho adults in sufficient number to constitute a quorum, needed to provide its blessing. But that seemed like a foregone conclusion. In all his work to bring buffalo back, Trosper had heard nary a negative word. The stars were aligned, or so it seemed.

“Why would I be worried?” Trosper says. “We’re Arapaho people, and that’s our culture … We were about four or five days away from them actually being here. I wasn’t worried about it.”

Then he adds, “I guess I should have been.”

What happened at the General Council in April 2009 depends on who you talk to. Brucellosis, and the specter of the state killing off the tribe’s infected cattle, played prominently. Perhaps it was bad timing, or a meeting just gone on too long. Or maybe the idea hadn’t been explained enough, or some elders didn’t follow the fast flow of English words, or the resolution was poorly worded.

Uncertain, even fearful, some people abstained; and on a close vote, the Yellowstone buffalo were turned back from the Arapaho Ranch.

Culture notwithstanding, maybe it was just a dream after all. 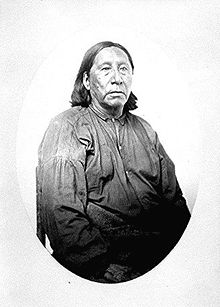 Little Raven, also known as Hosa (Young Crow), (born ca. 1810 — died 1889) was from about 1855 until his death in 1889 a principal chief of the Southern Arapaho Indians. He negotiated peace between the Southern Arapaho and Cheyenne and the Comanche, Kiowa, and Plains Apache. He also secured rights to the Cheyenne-Arapaho Reservation in Indian Territory.

Riverton – In early February the Northern Arapaho tribe called a meeting regarding their desire to re-establish a herd of bison on the Wind River Indian Reservation for cultural, ceremonial, traditional and nutritional purposes.
Northern Arapaho Bison Manager Ken Troster, who was hired by the tribe to investigate its options with bison, said the herd would be used for traditional ceremonial uses as well as to provide meat for the diabetic on the reservation. Although project information says the ultimate goal of the Northern Arapaho tribe is to bring back bison as free-roaming native wildlife, their present focus is to establish a herd on a 32,207-acre unit that composes six percent of the Arapaho Ranch and runs along the western edges of Boysen Reservoir and the Wind River Canyon.
Although the unit is partially fenced for cattle the enclosure needs to be upgraded for bison. “The plan right now is that we’ll lease a ranch outside of Thermopolis that’s already set up for bison for the next few years until we can build the secure fence,” said Troster of the Red Canyon Ranch, which has housed bison for the last eight years.
The bison would come from a project in Montana led by the Wildlife Conservation Society, of which project founder Keith Aune is a part. He said the Society established their interest in bison through the American Bison Society.
Logan said the bison would have to be imported according to Chapter 8 Import Rules. In this case, the bison will be imported as livestock, not wildlife. “The bison will have to be brucellosis vaccinated to come into Wyoming, and most of them have already been vaccinated twice,” he said.
Once they’re in the state the bison will have to abide by Chapter 2 brucellosis rules and any USDA/APHIS rules regarding the disease. “As long as the tribe complies with WLSB and APHIS rules, we don’t have any major concern with this from a disease standpoint,” noted Logan. “We’re being extremely cautious, and through an agreement with the bison recipient we’ll test them once more after they calve one more time and then monitor them four years after that,” said Aune. Logan suggested the tribe sign a management and animal health agreement with the WLSB and Fremont and Hot Springs counties. “It would have to be voluntary, but the reason to do it would be public relations,” he said.
“It would also be an animal health step with a plan to prevent disease and deal with it should any kind arise in the herd.”
Logan also said that, through an agreement with the Wyoming Game and Fish, the WLSB has authority to lethally remove any escaped bison, whether they come from the reservation or elsewhere. “The Game and Fish does not want wild herds of bison outside the Shoshone, Bridger-Teton or Absaroka national forests, so if they’re outside
off the forest zone they’re considered livestock,” he said. “We have an interest in working with the tribes to create opportunities for ecologically and culturally sensitive management,” said Aune of the plan. “There are a handful of places in North America where the land and interest are there to consider this kind of a venture and with the
Northern Arapahos we’d be matching up their interest in having a cultural herd with the availability of Yellowstone bison.”
If all goes as planned the Northern Arapaho tribe will receive their first bison at Thermopolis this spring. /

acre reservation pasture and another eight to 10 due in October.

Yellowstone. The park and the reservation are each approximately 2.2 million acres.