One of my latest creations, being offered for sale.
It’s probably close to 80% re-purposed materials.
The pit comes off the wagon.
Each wheel is removable with a key pin.
The front axle also can be removed.
Handle hooks in the tongue and is built also to be used as a fire poker.
Front axle pivots for easy maneuvering.
The short tongue can be lifted and easily pinned out of the way.
A plasma cutter was used to cut out holes to mount the buffalo figures. 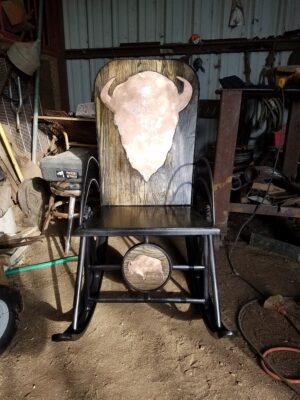 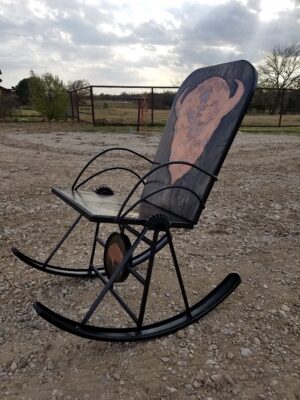 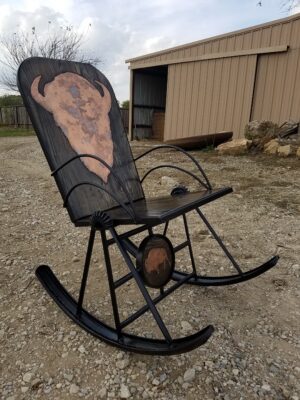 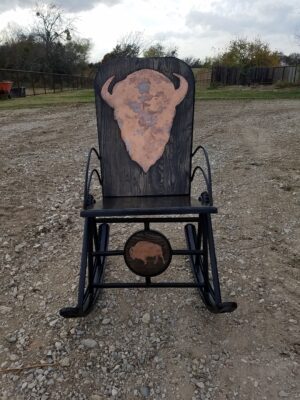 This rustic rocker is made from a 44 inch 16 spoke old steel wagon wheel.   I cut off all the spokes, cleaned the rocker channel and welded a flat strip down the center, and replaced the spokes. Additional spokes were cut out to use as the framing for the circle bison under the seat. The wood is repurposed hardwood, stained in black to set off the copper finish. The arms were heated and bent to the shape of bison horns.

Wagon Wheel Dog Bed – the bed is 27 X 35 and 14″ high, painted dark chocolate. I just made the purple dog mattress to show off the dog bed. If you want it included, just know I am not a seamstress by any means. It’s just a cover that is faux purple suede and is closed at one end with velcro, so the foam can be taken out. This cover is made roughly 29″ X 39″, for a 2-3 inch memory foam insert. $245.00 (with or without the purple cover)

The front and back are decked out with Buffalo Nickels, half are
with the buffalo showing and half are with the Indian head showing.

Just finished my version in metal. 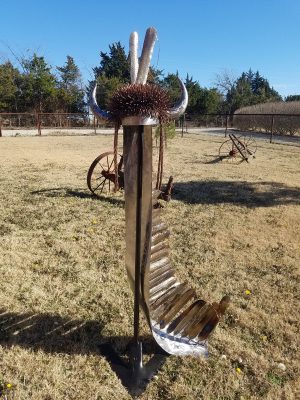 I was just curious if I could make a feather. After making my first feather I wanted

to do something with it, there sprouted the idea of the headdress. I am “all about bison“ so it had to be bison-related. I researched the Native American headdresses and found most were very different from each other. They were a very personal item to the wearer and were decorated with items that were important to them. The headdress was earned, they were not given. The wearer had done something for the tribe whether it be courage, strength, or in his wisdom. Each feather was earned by doing another act, some just had a few feathers and others had a full-length dress at the time of the historic photos. They were also called a War Bonnet. They were not worn into a battle, they were used in ceremonies whether of their own making or when they met with others of stature. They were mostly used among the Plains tribes and often decorated with trade fabric; trade fabric was red wool from Europe. Some had bells, horsehair, feathers from a few different birds of prey, bison wool and hair, short-tailed weasel hides. The bison horns were usually from a cow, although I did see a set that was from a bull. I read they wanted to appear massive and scary to their enemy, like the bison. (Note to self: if they were not worn into battle, how could this be true?) It could be true if it was a way of building their tribe’s personal power within themselves.

The American History site: Buffalo Headdress. Buffalo headdresses were usually worn by warriors. Buffalo headdresses were made using buffalo’s horns, fur, and tail. This type of headdress was important for ceremonial and spiritual celebrations. Only well-known male warriors wore buffalo headdresses. Only a few Native Indians wore this horned headdress because only a few tribes used this and only warriors of particular clans or people who had accomplished brave deeds can wear bison horns.
Indians org: Each time the warrior earned a feather, he would either wear it (but he only wore a couple into battle) or put it on a pole used for special occasions. Once he had collected enough feathers, they were then made into a headdress. Because each feather had a special meaning, binding them together in a headdress made that Indian headdress was even more special. Only the men, closest friends of the warrior, were involved in making the headdress. The Indian chiefs also “earned” each of their feathers. The most prized of all feathers to receive for an Indian headdress was the Golden Eagle feather. Because the Indians saw the eagle as a messenger of God, this feather could only be earned through hardship, loyalty, and strength.
I’m sure there is plenty more to learn about the Headdress or War Bonnet, all in all, they each are a beautiful work of art.

Just a few items I have made over the years. 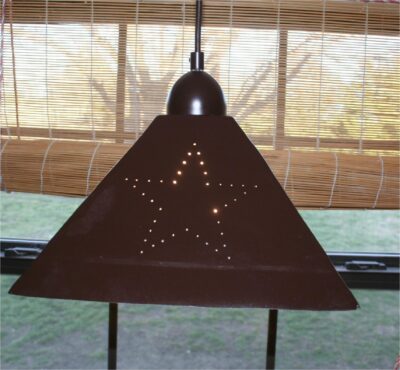 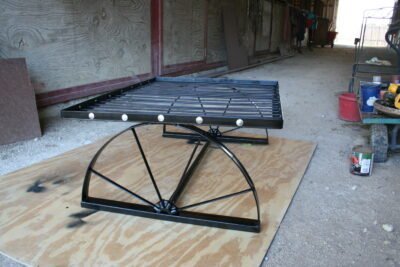 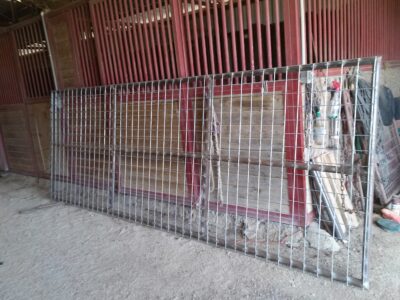 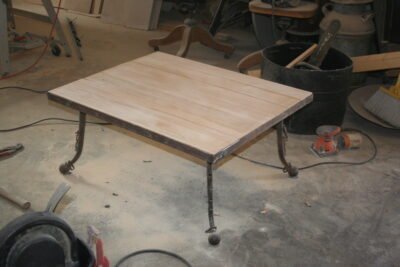 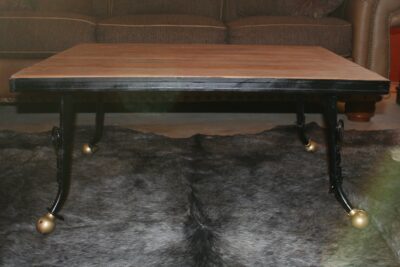