Of all the white people’s activities in Indian country none enraged and disheartened the Native Americans more than the destruction of their buffalo. Hide hunter Billy Dixon reminisced that the annihilation “lay at the very heart of the grievances of the Indian against the white man in frontier days.” At the Medicine Lodge Treaty Council of 1867, the great Kiowa chief Satanta complained bitterly about the army’s shooting of his buffalo. “A long time ago this land belonged to our fathers,” lamented Satanta, “but when I go up to the river I see a camp of soldiers, and they are cutting my wood down, or killing my buffalo. I don’t like that, and when I see it my heart feels like bursting with sorrow.”Satanta was furious at the army because the two infantry companies that escorted the peace commissioners from Fort Lamed to Medicine Lodge Creek had wantonly slaughtered buffalo along the route of their march. Riding spare cavalry horses, most of the soldier hunters had dismounted to cut the tongues from the animals they had dropped; others sliced hump steaks from their kills; some merely left the dead buffalo lying where they fell and rode on to continue the bloodshed.

In response, Satanta complained to General William Hamey, asking “has the white man become a child, that he should recklessly kill and not eat? When the red men slay game, they do so that they may live and not starve 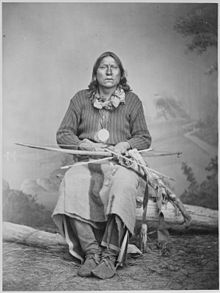 Satanta (ca. 1820 – October 11, 1878) was a Kiowa war chief. He was a member of the Kiowa tribe, born around 1820, during the height of the power of the Plains Tribes, probably along the Canadian River in the traditional winter camp grounds of his people. He was also known as Settainte (White Bear). One of the best known, and last, of the Kiowa War Chiefs, he developed a reputation as an outstanding warrior and in his twenties was made a sub-chief of his tribe, under Dohäsan, as Chief. He fought with him at the First Battle of Adobe Walls, and earned enduring fame for his use of an army bugle to confuse the troops in battle.

Satanta (Set’tainte) was born the son of Chief Red Tipi and a Spanish captive and spent his youth south of the Arkansas River enjoying the peaceful alliance between the Kiowa and Comanche tribes.

1867, Major General Winfield Scott Hancock, then commander of the Department of the Missouri, which embraced Missouri, Kansas, Colorado, and New Mexico

“A t a council held at Fort Lamed on 1 May 1867, Hancock said to Satanta. (Basically)
You know well that the game is getting very scarce, and that you must soon have some other means of living; you
should therefore cultivate the friendship of the white man, so that when the game is all gone, they may take care of you if necessary.

Douglas C. Jones’s study of the Treaty of Medicine Lodge reveals that the United States Peace Commission
composed of seven men, three of whom were generals in the regular army, took for granted the impending extinction of the buffalo and did not even discuss saving the herds