Valdeserrillas, 29 April 2016 – 12 European bison have been released into Valdeserrillas nature reserve, Spain, this week in the largest bison reintroduction ever in Western Europe. True Nature Foundation collaborated with the European Bison breeding programme of the European Association of Zoos and Aquaria (EAZA).

The first seven bison, from Fota Wildlife Park, Ireland, arrived earlier this week. Another five European Bison from Howletts Wild Animal Park and Port Lympne Reserve, United Kingdom, have joined the herd today. Both parks are owned by the Aspinall Foundation who also provisioned the transport of the UK animals to Spain.

The release of the European Bison, or Wisent, as they are known in Europe, is part of an ambitious project to restore the once seriously endangered large herbivore to its former ecological range.

European bison were driven to extinction in the wild in the early twentieth century as the result of habitat destruction and severe hunting. Through the captive breeding of the species in European zoos and a series of reintroduction projects, the population has gradually begun to increase and the IUCN subsequently reclassified European bison as Vulnerable, rather than Endangered.

Valdeserrillas is an exciting nature restoration, or rewilding, project. The area is about to receive a UNESCO status and will expand in this and coming years.

Next year True Nature Foundation will support the release of more Wisent into Valdeserrillas and other areas in Spain and Europe. Henri Kerkdijk-Otten, chairman of True Nature Foundation, is optimistic about the future “ We hope it will mark the start of a fruitful, and long-lasting, cooperation between all the organizations involved in the breeding of the European bison, with us all working towards the common goal of reinstating European ecosystems to their original and complete state ”. 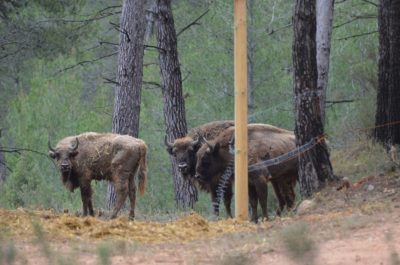