The park today announced the birth of a baby European bison, born on October 25.

The five-and-a-half-week-old female was born to mother Blue and father Hyssop.

The European bison, also known as the ‘wisent’ is a distinctive looking animal with a thickset body, short neck and a visible hump at the shoulder.

They have a dark brown mane under the neck and forehead and a big bull can weigh up to 1,000 kilos and reach a height of six feet.

Classified as vulnerable by the International Union for Conservation of Nature (IUCN), the European bison (Bison bonasus) is the continent’s largest land mammal.

Lead Ranger Aidan Rafferty said the workers at the park are “delighted” with the announcement.

“Once extinct in the wild, recently the species had a population regrowth in Eastern Europe,” he said.

“It brings meaning to everything we do here to be a part of this long-term conservation plan that has seen the European bison re-established in the wild from captive-born animals from zoological organizations.

“It brings to life, literally, exactly what zoos and wildlife parks are all about.” 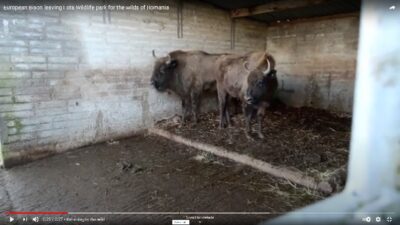 Tayto Park
The zoo has an impressive collection which includes an Amur tiger, an aardwolf, American bison and meerkats. Younger kids will love being able to pet the African pygmy goats, and adults can take pictures with the snowy owl. Expect to be bowled over by the cuteness of the tiny corsac foxes, who love nothing more than to come over and say hello.