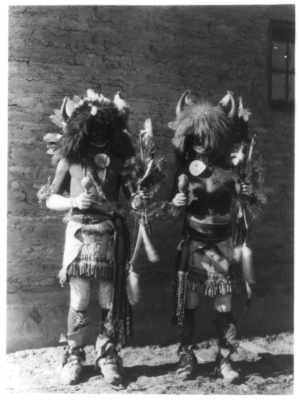 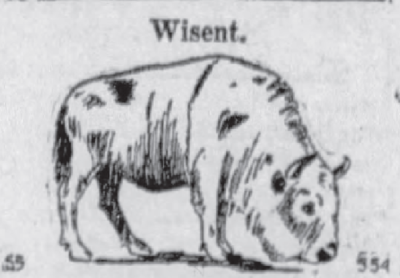 When the Spaniards and the French’ first penetrated the American West, they exclaimed in wonder over the massive wild cattle, the bison or American buffalo, which they found there. Had the peoples of Southwestern Europe of those days been more conversant with the natural history of the forested regions about the Baltic, they might not have had so much cause to wonder, for, in the woods of Lithuania, there lived a species of true bison native to the Old World. A few survivors of this herd still live there, and there are a few more down in the fastnesses of the Caucasus Mountains.

This European bison is known variously as wisent, zunbr, and aurochs. The last name, however, is incorrect and belongs to a species of wild cattle that ranged the wilds of Europe until into Roman times. The wisent would have followed the aurochs into the limbo of lost animals, too, had it not received the benefit of Government protection just as the American bison has on this continent.

It is probable that the number of surviving wisent is much smaller than that of bison in the United States and Canada, but it is very likely also that their original range was quite as great in the Old World as that of its relative was in the new. A few years ago a German archaeologist,  studying a collection of ancient cylindrical seals, found on some of them images of men, or possibly gods, doing battle with shaggy-maned bulls that are unquestionably specimens of the wisent. Nimrod, that mighty hunter before the Lord, may well have been a prototype of Buffalo Bill!

That is the label on the old rifle. We wish that it might talk so that we could listen to its tales of other days.  But this particular piece has been loaned to the museum of the normal school by Mr. Otto Uhlig whose father carried the old rifle along the North Platt, killing bison with Buffalo Bill, during the construction of the Union Pacific during the late sixties, 1967-1869. Prof. F. L. Bennett states that those wishing to see the old rifle may call at the office of room 202.

The Betsy Ross of Wyoming

Mrs. A. C. Keyes of 102 Oakcrest Ave., designer of the Wyoming State flag, is quite appropriately a native daughter of the state, having been born in Buffalo, Wyo. In addition to her western patriotism, she is an artist by both instinct and training, therefore particularly adapted to the work of designing the flag for her native state. As a D. A. R. member, she becomes the more fittingly chosen to assume the role of a modern Betsy Ross.

With extreme good taste Mrs, Keyes. (who was then Miss Verne Keays) chose the national colors of red, white and blue for the Wyoming flag. The bison or buffalo forms the central figure, and it is branded with the great seal of the state, in true western style.

Besides this flag, which was adopted by the fourteenth state legislature, Mrs. Keyes has won many honors in national exhibitions of art. She graduated with honors from the Chicago Art Institute, and the Woman’s college at Cleveland, Ohio. Her specialty is decorative design, watercolor painting and interior decorating.

American bison or buffalo have been protected by the Government,  and while there were only about 800 alive some 25 years ago,  there are now more than 15,000 of these animals in the United States.

J.R. Garrett, of Dorrance, a brother of Wm. Garrett, of Oakley, has written the following story concerning the buffalo or bison which roamed this country when he first settled in Russell Russell county. The brief historical sketch will be interesting to the present generation as well as the old buffalo hunters among our readers.

The American buffalo or bison known as the Indians’ cattle had many traits, instinct or knowledge that was given to them from God. They improved it, to perfection, and as time went on, when the enemy gathered around them, whether it was wild beasts or white men they would gather their calves and weak ones in the middle and the stronger ones would gather around the outside.

They did not need to go to school to fill their sphere in life. They handed down their knowledge from generation to generation. Each one was a masterpiece of his own. They never failed for a leader. The white man and wild beast wasted them, but the Indians never did, they put a value on him.

The white man used them for meat. Had hides by the million and used their bones for fertilizing and their dung for fuel. We used to cook our flapjacks in buffalo tallow, and told when they were done as they would float.

Buffalo Park was not named after a park of trees, but a park of buffalo. I have seen the landscape dark with them as far as I could see.

They would graze north in the spring and south in the fall, by the millions, and were often known to stop a train.

It has been said that the buffalo has fourteen ribs per side, the ox thirteen, and live from thirty to forty years. The large ones weight about 2,000 pounds. Their flesh is meat and vegetables both to the human race.

They most always kept guards on picket duty. I watched a herd one day going across the Canadian river. The herd stopped and a big male animal tried it five or six different places, quick sand was very bad and finally, he found a place where there was no sand and he went back to the herd. They followed him across O. K.

In traveling lots of times one will go ahead if he finds any danger, a great many times he will go back to the herd and take another direction. An old buffalo hunter will crawl up among the grass on the opposite side from the find because if you are going with the wind, they can smell you and if he shoots one the rest will try to hook him up. Sometimes he would shoot down as high as twenty, and they will try to hook up their dead to take them along. (This is what an old buffalo hunter calls a stand.) They will finally give it up and leave. If you can get close to them, with a good running horse on the start it will bring you right up along their side and you can shoot them right behind their shoulder blade.

You might shoot at their heads twenty times and never get one. Their long hair and thick hide and skull makes them hard to kill.

They will hardly ever fight you unless you try to take their young or wound one, then they will fight.

The hides were worth from $1.00 to $1.25. The whites used to trade the Indians a cup of sugar for a buffalo robe. The Indian tans were worth from 20 to 30 dollars. They used to tan them with the brains and marrow from the buffalo bones.

Most of these buffalo wallows and lagoons (made to hold rain water) the buffalo pawed out, did not have hardly any grass in when I first came to this country in 1872.

I can take you to these draws and creeks and rivers that have not been broken up and show you the buffalo trails where they went to water and then back to pasture, sometimes for forty miles.

Five million buffalo how much mud would that be? 2,250,000 pounds of mud. Count that up for 100 years and two rains a year; and a hundred thousand tons of dust each year.

I believe the buffalo made the Cheyenne Basin. Wouldn’t you like to know where the Indian and buffalo came from. The Cheyenne bottoms takes in 25,000 acres. It has been covered with water many times. When you plow it you can tell it has been pudded, yes by the buffalo. I heard it said when the red man shook hands with Columbus, he called him a Yankee and the meaning of Yankee is tricky.