INFORMATION ABOUT ALL WISENT CONSERVATION UNITS

International Society for the
Preservation of the European Bison (ISPEB)

The Society for the Protection of the European Bison (SPEB) was founded in 1922 by scientists from Poland, Germany, the UK, and Sweden. The charity’s aims were to conserve and repopulate the European bison, or wisent, that was then on the brink of extinction. After the last wild wisent was killed in 1927, SPEB reintroduced wisents (from collections in zoos) back into the wild in the Bialowieza Forest of Poland, where they still exist, as a vulnerable species (defined by the International Union for Conservation of Nature). 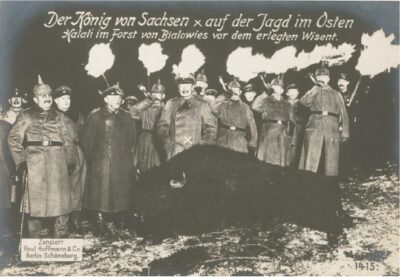 WWI German postcard.
“The King of Saxony on the hunt in the east Halali in the forest of Bialowieza in front of the hunted Wisent.”
It looks to be torches lighting the area for the picture.
Paul Hoffmann & Co., Publisher
Charles I, Emperor of Austria

The European bison featured two distinct subspecies – a lowland bison, also called the Białowieża bison Bison bonasus bonasus and the mountain Caucasian bison Bison bonasus caucasicus.
The Caucasian bisons did not make it to our times. The last bison of this subspecies dies in the Caucasus in 1927. Only one specimens survived, transported from the Caucasus to Germany in 1908. This one year old bull was kept in a private zoo in Boitzenburg in Germany. It was living in captivity for 18 years.

At this time, also Białowieża bison were kept in the zoos and zoo parks. The aforementioned bull had numerous offspring with the Białowieża females, representing a mixture of Caucasian and Białowieża bison. Even though the currently bred bison have only a minor share of the original Caucasian bison genome and they do not look in any way different than the lowland bison, they are bred and kept separately. Currently in Poland, lowland – Caucasian bison are living exclusively in Bieszczady.

Currently, there are several herds of free roaming lowland – Caucasian bison in the several ranges of the vast Caucasian mountains. Unstable political situation in this region resulted in a dramatic decrease in the largest herd in Cejskim Zapoviedniku in the area of North Ostia. A smaller, free roaming herd in Chechnya was completely wiped out. The fact, that in the area occupied historically by the Caucasian bison (Kaukaski Zapoviednik) are currently also shared with a mix between American and European bison (obviously not included in the world register of bison), is unfavourable for the future of the free roaming bison population in this region. At the beginning of the last thousand years, lowland bison were common game in the vast forests covering Europe at this time and represented a highly valuable game. In the Middle Ages in certain Europea

n countries, including Poland and Germany, bison hunting was a royal privilege. In Poland, bison protection is first mentioned in the Lithuanian Statutes (16th century), while King Zygmunt August pronounced

a decree indicating that anyone responsible for the death of a bison without a royal authorization would be put to death. Despite that fact, the total number of bison was in the decrease and their living habitats were shrinking. The main reason is the shrinking of the total area of the mixed and deciduous forests – the natural refuge of the bison. 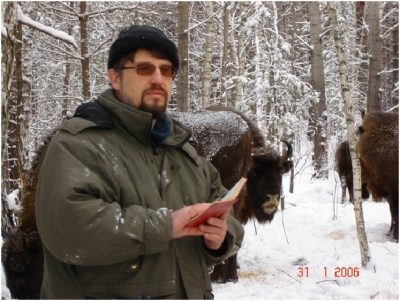 Status of Reintroductions of three Large Herbivores in Russia

The Return of the Bison to the Caucasus

A male and four female bison from Poland will occupy a 50 hectare enclosure in a forest near Suchy. The objective is to perpetuate the species, by relocating small groups called upon to reproduce.

A species with around 6,000 individuals

Five bison will be present at the start, but there could be 25. When young are born, adults will be moved to other cells in Europe and young will come to Suchy. It is the EBSG that makes the selections, the goal always being to “mix the genetic content”.

Source (Video of the arrival)

The total worldwide population is around 6,183 (including 4,009 free-ranging) and has been increasing.

Some populations are estimated as:
• Austria: 10 animals
• Belarus: 1474 animals
• Belgium: 22 animals
• Bulgaria: 35 animals
• Canada: 8 animals (2018 herd has grown to about 20 head and changed ownership)
• Croatia: 3 animals
• Czech Republic: 77 animals in 2015.
• Denmark: Two herds were established in the summer of 2012, as part of conservation of the species. First, 14 animals were released near the town of Randers, and later, eight animals on Bornholm. 31 animals 2015
• Estonia: 17 animals
• Finland: 6 animals
• France: One herd was established in 2005 in the Alps near the village of Thorenc (close to the city of Grasse), as part of conservation of the species. France has a total of 111 animals.
• Germany: A herd of eight wisents was released into nature in April 2013 at the Rothaarsteig natural reserve near Bad Berleburg (North Rhine-Westphalia). As of May 2015, 13 free-roaming wisents lived there. Total for Germany is 601 animals.
• Great Britain: 61 animals
• Hungary: 34 animals
• Indonesia: 2 animals
• Ireland: 18 animals
• Italy: 4 animals
• Kazakhstan: 18 animals
• Latvia: 9 animals
• Lithuania: 180 animals.
• Moldova Republic: 5 animals.
• Netherlands: Kraansvlak herd established in 2007 with three wisents, and expanded to six in 2008; the Maashorst herd established in 2016 with 11 wisents; and the Veluwe herd established in 2016 with a small herd. Total for Netherland 2015 is 33 animals.
• Poland: 1567 animals 2015. (some 2016 data shows Poland having another 131 animals, these are not included in the total at the bottom)
• Portugal: 2 animals
• Republic of Macedonia: 1 animal
• Romania: Almost 157 animals, population slowly increasing
• Russia: 986 animals, population stable and increasing
• Serbia: 1 animal
• Slovak Republic: A bison reserve was established in Topoľčianky in 1958. The reserve has 25 animals, but has bred around 180 animals for various zoos. There is also a wild breeding herd of 27 animals (2015) in Poloniny National Park with increasing population.
• Spain: Two herds in northern Spain were established in 2010.  Spain, has 79 animals.
• Sweden: has 139 animals.
• Switzerland: has 37 animals.
• Ukraine: A population of around 288 animals 2015.

Tourist handbook
There are more than 750 European bison living in Białowieża Forest. Approximately 450 of European bison live in the Polish part of Białowieża Forest. While walking through the tourist trails one has a chance to come across these glorious animals. It is worth knowing that:
– European bison, in spite of their bulk are fast (up to 40 km/h) and agile (jumping over the obstacles approximately 2 m high);
– European bison, if not provoked, shall walk away peacefully;
– On approaching European bison, visitors shall keep the distance of 50m, or more;
– mothers with their calves within the period of calving (between the end of May and June) and single males
are particularly dangerous.
/
How to behave when you approach the European bison?
– having spotted the signs of European bison irritation (nervous tail movement, hoof pawing, rolling etc.) leave the place, as soon as possible, remaining calm;
– if you drive a vehicle – slowly stop the vehicle, do not leave the vehicle, do not turn the engine off; you can open
windows, but do not open the doors, the noise might frighten the European bison;
– if you ride a bike – stop, the best idea is to stand in the close trunk of a big tree, in order to be less visible;
– if you walk – do not try to follow the European bison, stop in a place where you are less visible for a bison, do not move quickly.Do not enter the places where European bison feed in winter, with the exclusion of places where tourists access is permitted (European bison mainstays „Kosy Most”, „Czoło”, „Babia Góra”).
/
Behavior
Behavior of bison depends significantly on the behavior of people communing with them: the fewer contacts with humans, the more skittish the animals are, while when encounters with humans are more frequent, they lose their fear of humans and can be even aggressive. bison bred in reserve are far more aggressive towards humans than bison living in the wild. In principle, adult bulls are the least skittish ones, and the ones which are the largest and the strongest ones, really feel the masters of the forest and treat humans with ostentatious indifference. No one ever managed to domesticate an adult bison, since taking excessive liberties with this grand ruminant ends very often with a violent and adverse reaction.

There is a private herd in the U.S.

The Wisent has one extra lumbar vertebra.

They have an extremely slow metabolism and grow at a rate about twice as slow as a plains buffalo. (comments are from the article, published in 2016)

I did reach out to Dan Shepard, who I was told, was the guy to talk with about Wisent. I asked how they compared to American bison. Dan had his Wisents from the early 1980’s to 1990’s.

“The European bison is really a different animal.  Although they look somewhat like the American bison they are completely different.  At one time we had 32 of them on the farm which was the largest privately held wisent herd in the world at that time. We got them from zoos here in the US and Canada and they we glad to get rid of them I think as they were a pain to work with. With them being zoo raised they did not respect humans like a wild one would. In fact when we would get some in from a zoo and we would leave them in the corral a few days to see that they were ok then we would turn them out to pasture. They would not leave the corral as they liked the confined space for weeks. My corral was designed for buffalo and I never had a buffalo escaped from it and at one time we had over 900 of them. The wisent could jump and tear it up more than any animal and were the only ones to ever to escape from it so we had to build it higher.
I never trusted them and never turned my back to them like any other animal.”

Dan Shepard, no longer has bison, conflict of regulation reasons from his state at that time.

Tad Puckett  (2022) He no longer has his herd of about 40 head at its height, except one bull that is sold as a hunt bull this winter. He obtained his herd from another guy who got them from a national zoo about the mid 1990’s. He said they were slow to reproduce for him in Nebraska.