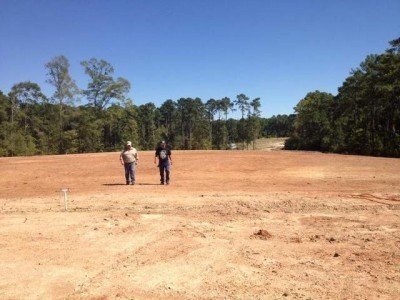 The article states that a museum will be coming.

For hundreds of years before Europeans came to the United States, the Choctaw Nation was a tribe of farmers who lived in what is now the southeastern U.S. until the federal government forcibly removed most tribal members in 1830 to Southeastern Oklahoma in what became known as the “Trail of Tears.” Tribal members have overcome adversity to grow to nearly 200,000 strong, the country’s third largest tribe. The tribe’s growing business enterprises have allowed it to work to improve the lives of tribal members who have a rich tradition of serving in the military (see Code Talkers) serving their community and the State of Oklahoma.
Aug. 5, 2010 FOR IMMEDIATE RELEASE

DURANT, Okla. – The Choctaw Nation of Oklahoma (CNO) has been building a reputation for its efforts to preserve its native heritage. An exemplar form of this heritage preservation comes in the form of raising massive wild beasts. That’s right, buffalo.

These staples of Choctaw history can be found roaming the meadows and pastureland at the CNO ranch in Tushkahoma, one of the four working ranches of the CNO.

The Tushkahoma ranch is 2,930 acres of native pastureland and natural landscape with a pond about every quarter of a mile, said Jack Pate, the Executive Director of Special Programs, as he explained the landscape. These conditions provide the buffalo with ample room and resources to thrive.

“We have 37 mother cows, three bulls, and 21 calves in our buffalo herd,” stated Pate. “They are primarily for heritage reasons,” he continued. The herd is kept to a manageable number due to expenses. At one time the CNO had in excess of 150 head of bison/buffalo.

The CNO ranching operation is a completely self-sufficient business endeavor with almost all of its revenue coming from the beef cattle operations. The cattle make enough profit to sustain the buffalo herd.

Besides heritage reasons, the buffalo are also used for breeding purposes. Other breeders may utilize the Choctaw herd to aid their own herd production by the purchase of bulls and heifers. As of now, CNO is the only tribe of the five major tribes to have a buffalo herd.

“These are true North American Bison, typically called Bison,” said Pate. They are tested annually for brucellosis/tuberculosis and certified disease free by the Federal Veterinarian Services.

A small piece of land at the ranch is being fenced off in respect to the Labor Day festivities, which are fast approaching. Buffalo tours will be set up from 2 to 4 p.m. on Saturday and Sunday during the festivities. A bus will take groups out into the pasture where the buffalo have been moved and visitors will be able to observe the buffalo in a natural state as they go about their daily activities. The herd will be put into the tour area the night before the tours begin and will remain there for the two-day period.

While the tours are completely safe for the public, there are precautions to be taken while visiting the buffalo. Visitors are prohibited from trying to touch (pet) the buffalo, get close to the fences where buffalo are being kept, or conduct any activity that would make the buffalo feel threatened.

These buffalo are not intentionally mean, but “people have to remember that these are wild animals,” stated Pate. He continued by saying that he recommends people stay on the bus during the tours. Patrons will not be allowed to get close or walk among the animals.

In addition to the buffalo, the Tushkahoma ranch is home for three Longhorn show steers, 20 beef cattle, and four Paint colts. The ranch sported over 330 Mustangs at one point, but due to economic reasons has decided to narrow its horse population and focus on the beef cattle.