The migratory nature of certain extinct animals may safely be assumed from their affinities with living species; but direct proof of this, of some value, has lately been obtained in England. In a quarry near Castleton in Derbyshire is a fissure, called the Windy Knoll fissure, which has been ascertained to contain the bones of a great number of bison, reindeer, grizzly bear, wolf, fox, hare, rabbit, and water rat. These were confusedly mingled, and the crevice has been filled partly with stalagmite, but mostly with loam. From the relation of the fissure to the drainage of the surrounding country, it has been suggested that the animals fell into it when they went to drink and were washed in by floods. Prof. Dawkins thinks it may have lain in the path of the bison and reindeer, in their annual migrations, the carnivorous animals being caught as they follow the herds to run down stragglers. From an examination of the young teeth of the bison and reindeer, he concluded that those animals passed the crevice at different seasons of the year, some falling in on their northward trip, and some on the home journey. The fissure was opened in the newer pliocene, but whether before or after the glacial era, cannot now be determined.

“It is as important to Europe as the American bison for America, the Komodo dragon for Oceania, the polar bear for the Arctic, the gorilla for Africa or the giant panda and tigers for Asia,” said Lukasz Mazurek, a naturalist and founder of Wild Poland, a wildlife tourism company in the Białowieża region. “Don’t get me wrong, I know there are other species even more endangered than the European bison… But would our world be the same without them?” 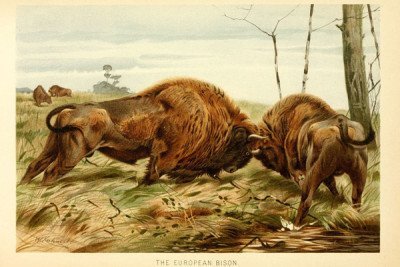 Let’s go back around 12,000 years to the Pleistocene. At the time, the European bison appears to have roamed from France in the west to deep into Russia in the East—though there is still debate on the breadth of their range. To the north, they inhabited southern Scandinavia while to the south they may have even ventured into the Italian Alps. They were hunted by Europe’s earliest humans and a favorite subject in Paleolithic art. Yet, their time was coming to a rapid end: the explosion of the human population and the rise of farming decimated the bison. Habitat destruction and overhunting wiped out one population after another until only a few populations held on, but barely.

At the same time, their fellow megafauna were winking out across the continent. Many of the top predators were already gone, but the woolly mammoth and woolly rhino disappeared from Europe around 10,000 years ago, the closely-related steppe bison around 9,000 years ago, and the Irish elk about 7,000 years ago. The auroch—wild, bulky cattle that were domesticated into today’s multifarious breeds—survived thousands of years longer, the last one perishing in a Polish forest in 1627.

The European bison could have whispered a similar story from the grave. By the nineteenth century only two populations remained: one in the Caucuses and the other in Poland’s Białowieża Forest. Herds only survived in Białowieża due to the will of kings, both Polish and Russian. From the 15th Century onwards, the Białowieża Forest was royal hunting grounds, protecting the forest, a few hundred bison, and many other species with its imperial status.

But the onslaught of World War I eventually led to the slaughter of Białowieża’s last bison. Occupying German soldiers killed off hundreds, while the final nine were likely poached by hungry locals. By 1919—one year after the armistice—the great forest was emptied. A single population survived in the Caucasus, but was exterminated by hunters in 1927. The European bison—which once roamed across much of Europe and into Asia—was gone from the wild. But it was not extinct. The species was saved, quite literally, by zoos.

From just 12 founding animals—11 from Białowieża and one from the Caucuses—conservationists meticulously bred the species across five zoos, splitting them into two genetic lines: the main lowland bison, and another group that mixed lowland bison with the lone Caucasian survivor. Over the ensuing decades they built the population up.

In 1952 a new chapter began for the European bison. Two dozen years after the last bison were hunted out, conservationists returned two bulls to Białowieża Forest and several cows soon after. This release would prove the beginning of a wildly successful reintroduction effort (pun intended).

Echoing Catanoiu’s sentiment, Mazurek of Wild Poland said that when bison return they quickly become a part of local culture.

“Bison are not only growing in numbers here, but they have also made it into the people’s minds.”

In Białowieża “there is none or hardly any poaching…and even the local farmers and foresters seem to respect them and understand their role and value in the ecosystem,” Mazurek went on to say. “They now firmly exist in both the natural ecosystem in the biological meaning and the total ecosystem including the people, their economy and development. I think this is a great success.”

According to Wouter Helmer, the Rewilding Director with the NGO Rewildling Europe, the European bison “is of crucial importance in ‘building’ natural landscapes and therefore for European biodiversity. Several thousands of smaller species are dependent on the structuring of vegetations by bison, their sand baths, tracks, manure, and carcasses.”

The European bison has become a popular target of rewilding campaigns for another reason as well: tourism.

The bison is an “attraction in itself,” said Helmer, one that is now “attracting tourists from outside to these often remote areas and thus becoming a new base for a rural economy.”

“Business wise, [the bison] is the core of everything we do,” he said, adding that the “the main reason why people visit [Białowieża] is the primeval forest and the bison, nothing else.” 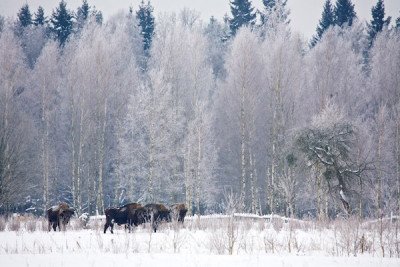 Still, for all the success in bringing back the species, the European bison is not wholly out of the woods yet (pun also intended).

The European bison is “[rarer] than the black rhino [which is] recognized as an endangered species and iconic for nature conservation,” said Rafal Kowalczyk, the director of the Mammal Research Institute at the Polish Academy of Sciences and an expert on bison ecology.

Rewilding Europe director Helmer pointed out that despite nearly a hundred years of conservation work there are still only a few big populations in the wild. He added that the top challenge “is to get enough self-sustainable populations…in different areas, different habitats, also to spread risks if a disease or other catastrophe appears.”

Catastrophe is certainly a possibility. For example, blue tongue disease, which is transmitted from local cattle to the bison via mosquitoes, killed two reintroduced bison in Romania last year.

Another concern is lack of genetic diversity given the bison’s near extinction. But Helmer said that growing populations of disconnected bison groups could provide the species a more robust genetic profile over time.

Despite these challenges, however, the wisent’s future prospects remain generally bright. Wild bison may be rarer than wild black rhinos and wild tigers, but unlike these species they aren’t facing a prolonged poaching crisis or massive habitat destruction. 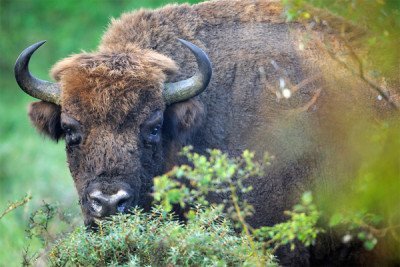 Bison in Zuid-Kennemerland National Park where the species inhabits grasslands and dunes instead of forest. Photo by: Staffan Widstrand/Rewilding Europe.

Still, even after decades of research and rewilding, questions remain. The biggest: is the European bison, sometimes even called the wood bison, actually most at home in forest habitats as traditionally thought or does the species prefer more open, park-like environs?

It’s not surprising that conservationists long believed European bison were happy forest dwellers, given that the last individuals survived only in dense, protected forest habitat. But some scientists now believe the bison actually prefer grasslands, and that their persistence in forests was simply because these areas provided the only protection left against two-legged hunters with arrows and guns.

Wherever the next herd of bison is reintroduced, Helmer said the main message of the success of the European bison is simply that species can be brought back from the brink.

“Conservation works,” he noted. “It is possible to save almost extinct species by setting up accurate and well controlled breeding programs.”

In a time when many big mammals are in rapid decline, the wisent provides an upbeat, optimistic story of what’s still possible. Yet, the bison’s story has been little reported, especially outside of Europe, in spite of the fact that it involves an unquestionably charismatic mammal and has an upbeat vibe—rare in conservation reporting. Perhaps all this has something to do with Europe not generally being viewed as a ‘wild’ continent, but instead as a place of urbane cities, fine art, and sophisticated cuisine.

Photo of two bison in Białowieża Forest from 1955,

shortly after they were brought back. Photo by:

But maybe this view should change. During my week-long trip in Poland, I encountered not only bison, but boar, red deer and roe deer, moose, otter, beaver, dozens of bird species, and spent one long afternoon chasing wolf tracks. All this in the dead of winter—and all this in Europe.

“Wildlife in Europe can be as spectacular as in Africa or the U.S. The combination with cultural highlights making it even more attractive,” noted Helmer. “The large scale land abandonment of the last decades offers a unique opportunity to build this new pride of Europe.”

If Europe continues to push rewilding efforts, much of them will be built on the indefatigable and unheralded efforts to save the bison. The triumph of the bison could herald the return of a wilder Europe.

After being released into the wild in Germany just last month, a herd of wisents has welcomed its first calf. The first European bison to be born free in Germany in centuries has been named “Quintus,” and appears to be healthy.

For the first time in centuries, a European bison, or wisent, has been born in the wild in Germany, conservationists announced on Tuesday. The calf, which arrived early this month, belongs to a herd that was released in April.

The young wisent seems “perky,” said Jochen Born, a ranger at Wisent Welt Wittgenstein, the forest sanctuary surrounding the western German town of Bad Berleberg that is home to the animals. But any hikers hoping to catch a glimpse of the typically shy bison should keep their distance, he added, because the species is known for fiercely protecting its young.

The calf is the fifth to be born since the sanctuary began its project to reintroduce European bison to their native habitat. The fact that it was born outside of a corral in the Rothaar Mountain region is a “great success,” its website said. ………………(more)

The complete piece is at: http://www.spiegel.de/international/zeitgeist/species-reintroduction-first-wisent-born-in-the-wild-in-germany-a-901114.html

The European bison (Bison bonasus), also known as wisent (/ˈviːzənt/ or /ˈwiːzənt/) or 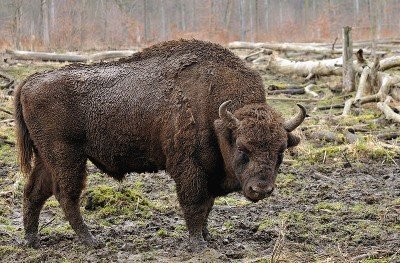 the European wood bison, is a Eurasian species of bison. It is one of two extant species of bison, alongside the American bison.
European bison were hunted to extinction in the wild, with the last wild animals being shot in the Białowieża Forest (on the Poland-Belarus border) in 1919 and in the North-Western Caucasus in 1927, but have since been reintroduced from captivity into several countries in Europe, all descendants of the Białowieża or lowland European bison. They are now forest-dwelling. They have few predators (besides humans), with only scattered reports from the 19th century of wolf and bear predation. European bison were first scientifically described by Carolus Linnaeus in 1758. Some later descriptions 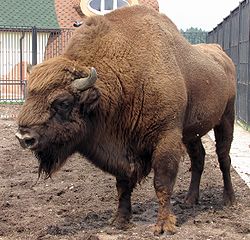 treat the European bison as conspecific with the American bison. It is not to be confused with the aurochs, the extinct ancestor of domestic cattle.
In 1996 the IUCN classified the European bison as an endangered species. It has since been downgraded to a vulnerable species. In the past it was commonly killed to produce hides and drinking horns, especially during the Middle Ages.

Jan 25 1913. In researching the European Bison, I found the above article. Wanting to see what the Aurocha was, I found this site. European Wildlife