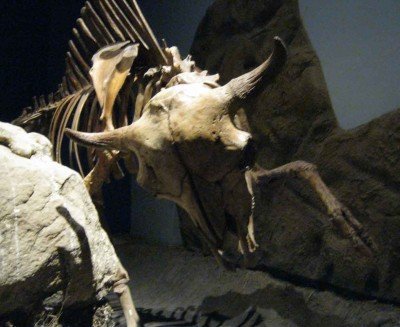 These bones belong to a prehistoric bison. The photo was taken by either myself, or my husband, at the Royal Tyrrell Museum of Paleontology, which is in Drumheller, Alberta, and is a fascinating place to visit.

There were many different prehistoric bison species and I am afraid I did not write down the name of this one.

“People down here are pretty envious of what we have and what we’ve accomplished,” he said after giving a presentation on his group’s namesake herd.The bison are spread throughout the Prince Albert National Park’s southwestern corner, as well as some crown and private land in the area.
“That’s the only completely wild free-ranging herd of bison in Canada, so that’s a really important herd.” from the Elk Island National Park of Alberta were released near Meyakumew Lake, n
The herd’s origins date back to 1969, when 36 female and 14 male bison north of the Prince Albert National Park.
Aside from the approximately 10 bison that moved south to the Sturgeon River Valley, the balance were shot or rounded up and trucked to alternate locations.
The initial herd of 10 bison thrived over the years, peaking at about 500 animals between 2006 and 2008.
Then, an anthrax outbreak in 2008 reduced numbers significantly — a factor compounded by increased wolf predation and First Nations harvesting, bringing the population down to between approximately 200 and 250, as of this year.
Although hunting isn’t allowed in the Prince Albert National Park, First Nations are allowed to hunt them outside the park — an area that University of Rottenburg, Germany, bachelor’s thesis student Volker Schmid monitored this summer.
While a peer joined Vaadeland at the Montana convention, Schmid stayed in Saskatchewan this week where he provided an update on his work at a Prince Albert Model Forest board meeting.

“The job begins when the bison leave the national park and go to private pasture and trample fences,” he said during the meeting.
So far this year, traditional First Nations hunters have killed approximately seven bison — hunters Schmid has been handing pamphlets to in order to let them know the latest population counts.

“We’ve taken some steps to work with the First Nations communities and their hunters to better-educate them on what they numbers are,” Vaadeland said. “They were operating under the impression there were 500 bison as opposed to the 250, so once better education got out to them they hunted less.”

That’s the only completely wild free-ranging herd of bison in Canada, so that’s a really important herd. Sturgeon River Plains Bison Stewards executive director Gord Vaadeland
Key to the bison’s success as a herd has been the support of ranchers who own land just outside the national park’s southwestern edge, where bison are known to trample crops and destroy fences.
“Any conflict with landowners is reduced or mitigated, or at least their concerns are heard and something is done about it,” Vaadeland said.
“We’d like (bison) to spend their time in the park, but not so much so that we’ll build a fence, because we want to keep them free-ranging – and, there are other species to consider.”
Vaadeland notes that in most areas of North America, bison preservation is an ongoing battle between NGOs and bison stewards with ranchers.
Most ranchers affected by Sturgeon River plains bison are on bison’s side.
“We’ve somehow, in little old P.A., managed to find a balance between having to address the concerns, but at the same time we all want bison and are happy to have that herd there,” he said.
Vaadeland, himself, is a rancher who owns land that bison are known to spend time on — a sometimes-frustrating predicament given bison’s tendency to cause damage.
“People only have a rope that’s so long,” he said.
“Ultimately, it’s tolerance that will allow them to remain on the landscape. There’s more than enough habitat for them, that’s not the issue. It’s, can we live together?”
In the midst of a population lag, Vaadeland said that he’s confident things are beginning to improve.
“If we haven’t completely (stopped the population decrease), we’re close and we’ll start seeing growth in the herd, but we still have lots of work to do.”
For more on the Sturgeon River Plains Bison, visit the stewardship group’s website, www.bisonstewards.ca.
Schmid will remain in Saskatchewan until early October, at which time he hopes to have better-cemented numbers regarding the Sturgeon River Plains Bison.
So far this summer, he reports that the biggest single group of bison he’s counted at a single time was made up of 147 animals.

Bison hits increasing on Highway 3
CBC.ca
There have been more bison hit by cars along Highway 3 this year compared to last. The number of bison being hit along highway 3 is up from last year. At least nine bison were hit between July and mid-August, Fred Mandeville with the Department of Environment and Natural Resources says. Normally, there’s only about four or five collisions in that period.

A survey of bison in the Fort Providence area estimates the population is less than half of what it was a year ago.
The survey was conducted in March and shows an estimated 714 bison left in the area. That’s down from 1,531 last year.
The territorial government blames last summer’s anthrax outbreak for the substantial decline. Last year, more than 400 bison carcasses were found in the Fort Providence area.
Bison biologist Terry Armstrong says there are probably many more, but their carcasses may be in wooded areas and weren’t found by crews.
“It’s impossible to predict how long it’ll take for this population to rebound and build back up to its previous size because we don’t know exactly how good the conditions are.”
But he is optimistic. Fewer bison, means less competition for the animals that survived.

“Given that there’s only half the number of animals that there were a year ago. I would think that the habitat should be able to support more animals than there are now and probably much closer to the previous number.”

The territorial government hasn’t allowed hunting of the bison since late last year. The government says there will be consultation with authorities in the area in the next couple of months to decide how the herd will be managed moving forward.

The size of the Canadian domesticated herd (genetic questions aside) grew dramatically through the 1990s and 2000s. The 2006 Census of Agriculture reported the Canadian herd at 2006 195,728 head, 34.9% increase since 2001. Of this total, over 95% was located in Western Canada, and less than 5% in Eastern Canada. Specifically Alberta was the province with the largest herd, accounting for 49.7% of the herd and 45.8% of the farms. The next largest herds were in Saskatchewan (23.9%), Manitoba (10%), and British Columbia (6%). The main producing regions were in the northern parts of the Canadian prairies, specifically in the parkland belt, with the Peace River region (shared between Alberta and British Columbia) begin the most important cluster, accounting for 14.4% of the national herd. Canada also exports bison meat, totaling 2,075,253 kilograms (4,575,150 lb) in 2006.

Parks Canada announces that Elk Island National Park has successfully provided an additional 30 wood bison to the Republic of Sakha, Russia, to support the introduction of the species. Here, some bison transferred on Thursday, March 21, 2013, from the Edmonton international airport.

This is the third transfer of 30 wood bison to the Republic of Sakha in Russia. Elk Island National Park has done other operations of this kind in 2006 and 2011. Here, wood bison are being boarded in the Ilyushin Il-76 transport aircraft on Thursday, March 21, 2013, from the Edmonton international airport.

·  As North America’s largest land mammal, millions of bison once ranged across the continent from Alaska to Mexico and were an important resource for Indigenous peoples who lived on the plains.

·  At the turn of the 20th century, wild wood bison were nearing extinction following decades of market hunting for their hides and to clear the plains for agriculture. Populations fell from around 168,000 animals to a few hundred in what is now Wood Buffalo National Park.

·  Bison are considered a pillar of ecosystem health, providing numerous benefits to nature and other animals.

·  Parks Canada strives to maintain a balanced herd with enough grazing land to keep them healthy, while also leaving vegetation and rangeland for other species. Periodically, bison must be translocated out of the park to ensure the habitat is not over-grazed, creating an opportunity to provide bison to conservation projects in North America.

·  Throughout Elk Island National Park’s history, surplus bison have been provided to other national parks, to conservation projects in Canada and the United States, and for auction where they have contributed to Canada’s successful bison ranching industry. Most wood bison in Canada today are descended from members of the Elk Island herd.

·  Wood bison as a distinct subspecies were once thought completely lost due to population decline and disease. However, in 1958 a small isolated population was rediscovered in northern Wood Buffalo National Park, with 22 of those sent to Elk Island National Park in 1965.

·  In an effort to create an “insurance” herd for the subspecies recovery, the small herd was placed in a former isolation area south of the Yellowhead Highway, which had been cleared of all its plains bison and other ungulates, considered as potential disease-carriers.

The difference between plains and wood bison

·  Wood bison are adapted for the colder climate of the north as their habitat once ranged across Alaska, the North-West Territories, as well as northern Alberta, Saskatchewan, and British Columbia. They are easily identified at Elk Island National Park as they are found exclusively on the south side of Highway 16.

·  Compared to plains bison, wood bison are larger and taller, and they have longer legs, darker fur, and hair that often droops over their forehead. They have smaller, pointier beards and their legs are not as hairy as those of plains bison. Wood bison humps are tall and rectangular and the highest point of their hump sits well far forward of their shoulders.

Why is the restoration of bison important?

Parks Canada supports the bison conservation for the following reasons:

·  Ecological Restoration: As “ecosystem engineers,” bison influence the landscape in ways that benefit many plant and animal communities. For example, bison create “wallows” – bowl-like depressions made by rolling on dry ground – that provide habitat for other animals. They deposit droppings that act as fertilizer for plants and support insect populations, which in turn feed bird species and a source of food for predators

·  Cultural Reconnection: Bison are an icon of Canada’s history. They were an integral part of the lives of Indigenous peoples and Canada’s pioneers, and they still have an important role in many Indigenous cultures to this day. Restoring bison to the landscape is an opportunity to renew cultural and historical connections.

·  Inspiring Discovery: Bison create opportunities for visitors to Elk Island National Park to learn about the ecological and cultural importance of bison.

·  Alignment with Parks Canada Mandate: Parks Canada manages an extensive system of protected natural and cultural heritage areas. In managing national parks, Parks Canada maintains or restores ecological integrity and provides Canadians with opportunities to discover and enjoy them. Protecting the wildlife, lands, and waters that make up the national park system helps to ensure these places are here for present and future generations to appreciate and experience.

·  The Government of Canada is committed to reconciliation and nation-to-nation relationships with Indigenous peoples, based on a recognition of rights, respect, co-operation, and partnership. Parks Canada recognizes the role of Indigenous peoples as partners in conserving Canada’s natural and cultural heritage and sharing the stories of these treasures.

·  Past translocations to Indigenous communities include 89 plains bison calves to the Blackfeet Nation in Montana in 2016, 25 wood bison to Saulteaux First Nation near North Battleford, Saskatchewan in 2018 and 30 plains bison to Flying Dust First Nation near Meadow Lake, Saskatchewan in 2019. Any Indigenous group interested in discussing a bison transfer is encouraged to contact Elk Island National Park.

This site has a lot of great information