Dried buffalo hides in the hair, sound in the grain, about 20lb per hide.
Dried Spanish Horse Hides in the hair, fit for tanning or covering trunks.
A few dozen of Dutch Calf Skins salted, about 136lb per doz.

Cargo of CROWN SCHOONER
Also, 50 buffalo hides imported in the PATRIOTEN; likewise the Guns and Small Arms belonging to Prince of Christian and Klempaa Privateers. ( these ads continued all year it seems)

Reports a ship seized by the United States and among the cargo was 4 buffalo skins.

There are plenty of horses, but of a diminutive size, and buffaloes are invariably used for every purpose of agriculture.

Household Furniture TO BE SOLD AT AUCTION, etc…

Mack, Williams, & Gieton, Auctioneers. The buffalo hides will be sold at two o’clock on Thursday, the 15th inst.

100 BUFFALO HIDES THE PROPERTY OF Mr. McKean, at his house, Hardwicke-place.

SPRING CATTLE SHOW
The ninth Show and Fair held by the Pennsylvania Society for promoting the breed of Cattle, took place at their establishment, at Bush Hill, on Wednesday and Thursday last. The following stock were exhibited…..

By Dr. Logan – His fine stud horse, Eclipse, and a colt by him.

Thirty Four poor steers, were sold on the second day of the show.

Mr. McIntyre, from St. Louis, showed a Bison calf, eleven months old – he measured four feet six inches round the body. It is to be regretted, that the farmers on the frontier have not yet crossed this strong animal with the native cow, as a breed would be produced, which would prove of the greatest utility, bearing the heat and cold of our climate much better and possessing greater strength that the Ox.

The distance from the Arricorsa to this mountain is about 450 miles over an extremely rugged tract, by no means furnishing sufficient supply of water; but during the twenty-eight days they were only in a few instances without abundance of buffalo meat.

Three days took them over to the plains of Madriver ( the name given the Big Horn above this mountain) which following for a number of days they left it where is was reduced to thirty yards in width, and the same evening reached the banks of the Colorado or Spanish river. Finding flocks of buffalo at the end of the thirty days’ travel on this stream, the party passed a week in drying buffalo meat for the residue of the last animals of the kind they would meet with. From this camp on one day they crossed the dividing mountain and pitched…etc

Extract from Lewis and Clarke travels.

This extraordinary range of rocks we call the gates of the Rocky Mountains. We had made twenty two miles, and four and a quarter miles from the entrance of the gates. The mountains are higher today than they were yesterday. We saw some big-horns, a few antelopes and beaver, but since entering the mountains have found no buffalo; the auditor however are in great plenty; the mosquitoes have become less troublesome then they were.

Henry I. Megarey. 48 Maidan-lane, has received by the late arrivals from England, a considerable quantity of Skivers and Basils or Buff Leather – also red blue and green roans- of a very superior quality, with a few Russian Buffalo Hides prepared for extra work. The above with an elegant assortment of Pockets, Books, Pen Knives, Scissors and Razors, will be sold reasonably by the boxes or otherwise. 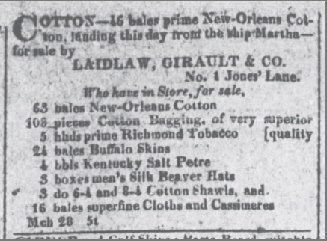 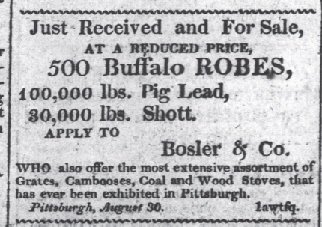 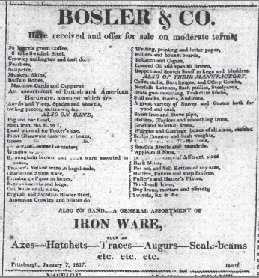 The Maryland Gazette May 7 1818
ANOTHER NEW MONSTER

To Dr. Mitchell, the editors of the New York Gazette are indebted for a copy of the following letter, addressed to him by James Crawford, Esq.

Understanding that you entertain a strong predilection for natural curiosities, I, at the particular request of a friend personally known to you, transmit you the subjoined relation, which you are at liberty to make use of as you may deem consistent.

Returning late last fall from the Indian hunting ground, situated near the mouth of the River Street Peters, I had an occasion to go ashore at a particular rock, which forms the cave noticed in the Journal of the late Mr. Carver, with two of my hunters, when our attention was attracted by a noise, somewhat resembling the bellowing of a Buffalo at a distance. We immediately proceeded in search of the object, and on arriving at the mouth of the cave, encountered a serpent of most prodigious appearance, probably 15 feet high in length, and proportionable in thickness, with four short legs, somewhat resembling the alligator. His head was disproportionally larger, with glossy eyes situated towards the back of his head. The back was of a shining black, covered with strong and apparently impenetrable scales. The belly was variegated with different colors. It’s tail on perceiving us was coiled over the back, except when it beats the ground, which was always accompanied by the bellowing which first attracted us. It may be enquired, why we did not fire on it, which can be mostly easily defined by imagining the indescribable agitation which the menacing attitude of such an it extraordinary________ would excite. The whole______ stood with their muskets cocked transfixed with terror, and tell it quickly glided into the recess of the cave. But be assured Sir, that we _______ not abandoned the idea of obtaining it in the ensuing spring. A _________ is already formed for the  ______ who are determined to brave ___ risk to gratify their curiosity ______ expecting this wonderful creature ______ should we succeed, on may dep______ on receiving a minute deline_____ as well as a faithful recital ____of circumstances attendant on the expedition.

I am, Sir, with respect your obedient servant, James Crawford

THE MAMMOTH
From the Emigrant, published at Louis.

The present appears to be an ___ fruitful and curiosities, on the _____ as well as on the deep. I take _____liberty to send you for publication a copy of a letter to Dr. Mitchell, written by a gentleman of New York, who has been for some time past, of sojourner in the wilds of

_____ per Mississippi. This strange ____ count which he very gives of ____ reappearance of the Mammouth, the causes of so great commotion among the wild animals – will affo___

to the naturalist matter of de___ speculation, and excite in the public generally, equal curiosity with the recent appearance of the great serpent on the shores of the Atlantic.

Believing that the occurrence which happened in this country, wi___

not be uninteresting to you, suffe___ me to describe to you the emigration of the Buffalo and the recent appearance of a large animal, supposed to be the Mammoth.

Do not be too surprised at the mention of a quadruped so famed for its size, and which has long since been considered extinct. Tho____ the present age is only acquainted with the skeleton of the Mammoth there is strong grounds for believing the present existence of this once formidable and gigantic animal. Various Indian accounts have lately reached us of its having been seen on the Big Prairie, and not far from the head of the Redwood River, which empties into River St. Peter’s. The latest account of it, is given us by the Sioux of the land, (as they are termed) a wandering band of the Sioux nation. They describe it as being far superior in size to the Buffalo, or any known animal that abounds on the Mississippi or its waters. On seen this animal the Indians were alarmed and terrified. They conceived it to be the Matchi Manitou or evil spirit. Besides the attention which the appearance of this animal has excited, the minds of the people here have been awakened at the site of numerous animals, that are collected to, and surrounded this place. What has given rise to this great commotion of the animal kingdom in this quarter of our country, will appear difficult to explain. From some cause or other the animals have been much disturbed; and being either impelled by fright, or the want to __sistence, have wandered from their unaccustomed abodes, and sought a shelter in this neighborhood. The deer, the panthers, and the bears, are now seen around us, and greater plenty than has ever yet been known. The Buffalo which has long since been driven off the Indian hunting grounds, and sought security from the Savage Hunter, by retreating West, have lately crossed the Mississippi nigh this place, inconsiderable herds; and are traveling towards the lake frontier.

To account satisfactorily for the extraordinary emigration of animals and the recent appearance of this supposed mammoth (which the Indian traders say, came from the unexplored regions of the Northwest) will be deemed it difficult. But I think one probable conjecture is, that earthquakes have been the principal cause. We have felt several light shocks here; and have received accounts of dreadful earthquakes in the West.

Latest from the Army.

A letter from Gen Mascock to the editors of the Journal, dated 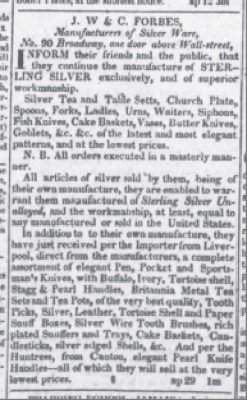 {extracted}
To be happy, perhaps, is to be usefully active, with the power of vocational relaxation; and if the Indian, in the pursuit of the deer and the buffalo, is happy, I much question the principal that will go to trespass on ground given to him by inheritance and original occupation, because the wants of civilization require more land to cultivate, or the gratification of his avaricious neighbor. 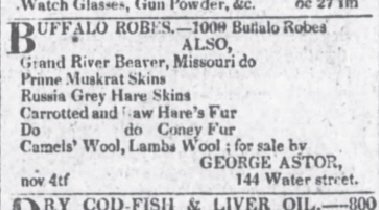 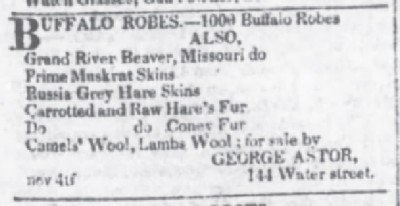 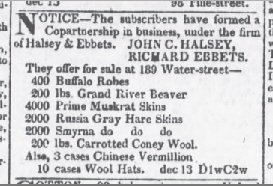 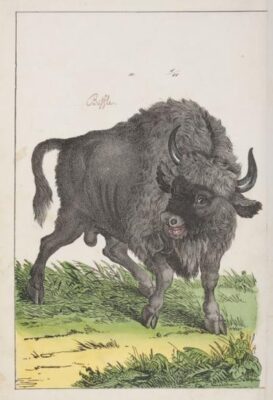 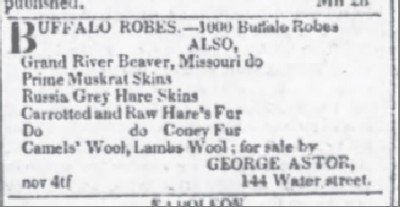