It’s rare to find a bison robe from back in the day. I have seen a few online from the Native community with writing or drawings on the back, usually in a museum. After reading all about the bison robes in history, I always wondered why we don’t have more or any, from settlers. Buffalo robes were their form of warmth while traveling in wagons or buggies on a cold winter day. I have read multiple classified ads of stolen or missing robes out of wagons.  There were millions slaughtered for their hides and many were shipped overseas, but still, why are there not more here?

Well, we have a treat from a family in Pennsylvania. “The oral tradition was that it would go to the oldest male Mumper thus ensuring it remained with the name “Mumper.”

I asked J. Mumper if I could share his family heirloom and he wrote for me some history about the family and the bison robe.

In the 70’s & 80’s a Mumper relative in Canada researched the origins on the Mumper in North America. At the time she published her finding something in the 1980s, there were just over 300 Mumper households in North America. My parents attended a clan reunion she organized at the family homestead (privately owned, not by a Mumper) on Mumper Lane, Dillsburg PA. All are descendants of George Michael Mumper born 1723 in Ochsenbach, Wittenberg Germany.  He came to America Sept 5 1751 on the ship “Elizabeth” and settled on a farm just outside what is now Dillsburg, York County PA. The name was spelled Mannber, then Mamber, Momber, and finally Mumper. He went by Michael and married Anna Margeretha. He Died in 1807. 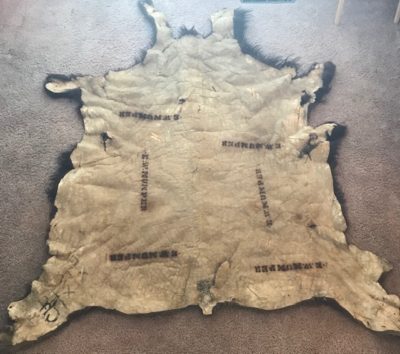 Edward and Susannah’s son William Henry (1852-1910) married Agnes (Trostle). They are my great-great grandparents and inherited the hide. Their son John Henry (1881-1958) married Sarah Ellen (Myers). Their son, my grandfather,

J J (1955-). The oral tradition was that it would go to the oldest male Mumper thus ensuring it remained with the name “Mumper.” 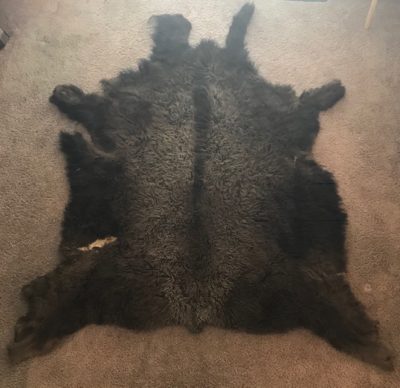 Edward’s obituary says he farmed in Franklin Township 1852-1880. This was approximately 10-15 miles from Gettysburg and well within the sights and sounds of the Battle of Gettysburg in 1863. Levi Mumper was a Gettysburg photographer at that time.

On a side note. The bison robe came to my grandfather in this antique chest. It certainly looks like it came from at least the mid 1880’s. The joints, square nails, hand carved pivots on the little compartment which, contains my mom’s hand written note listing Michael the first, second, third, Edward and dates, William and dates (although she had those dates wrong). She stopped at William because she knew John and Glenn.

Bison head with Trademark underneath. 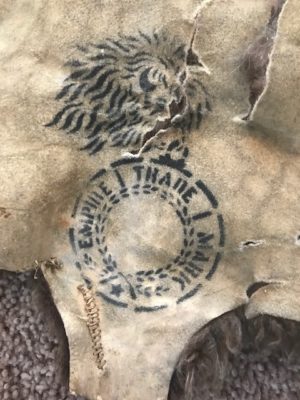 Other markings on the backside. 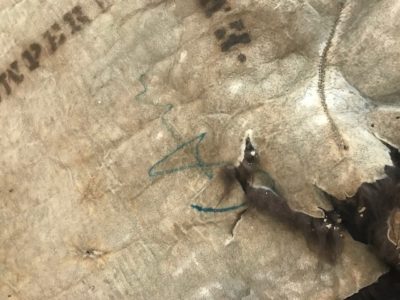 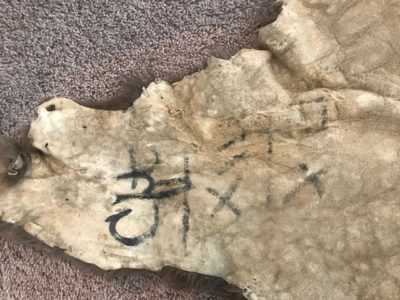