The most recent country to welcome back the bison was Romania, where the species vanished in 1862. In 2012, conservationists released five animals into Vanatori Neamt Nature Park. Since then conservationists have released 22 more in the Eastern European country and they are breeding.

“Our intention…is not only to reestablish a keystone species in the ecological sense but also in a spiritual and cultural sense,” said Sebastian Catanoiu, the director of Romania’s Vanatori Neamt Nature Park. 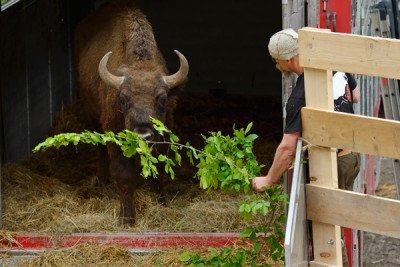 He explained that “according to legends, the foundation of the medieval state of Moldova happened during a bison hunt close to the [park]—at that time known as the ‘Bison Land.’ Since then the bison serves as the symbol of Moldova and is also represented on the Romanian flag.”

Happy bison after a release in Romania. Photo by: Staffan Widstrand/Rewilding Europe.

The herd will have 59,000 hectares to explore in the Tarcu mountains

Romania welcomed an old friend into the landscape on Saturday (June 13): the European bison, which was reintroduced to roam free for the first time in 200 years, Reuters reports.

17 bison were brought to a holding pen to acclimatise to the area in the Southern Carpathians last year in the largest operation of its kind to take place in Europe — a fitting scale for Europe’s largest wild mammal.

Joep van de Vlasakker, Rewilding Europe’s Wildlife advisor: “It’s a large mammal, it’s our biggest land mammal we have in Europe, and it’s a beautiful animal. It’s, when you look at it, it’s just amazing how beautiful they are. But they are unknown, a lot of European people don’t know that animal, so it’s a shame. So it’s very nice, I’m very happy now to bring them back to Romania so people can see them again in the wild. It’s a shame that people cannot see such a beautiful animal in such a landscape. Those animals are missing in this landscape.”

The herd will have 59,000 hectares to explore in the Tarcu mountains, where environmentalists hope they interact fully with the existing ecosystem.

In addition to the 16 other bison who arrived with it in 2014, the aim is to build up the population to 300 animals by 2024 in the mountain landscape. A new herd of 14 arrived to the holding pen on Friday (June 12) to get used to their new home after a 5000 kilometre journey from different ZOO’s around Europe.

Romania hopes their new guests will bring tourists and employment to the local community around Armenis, with bison rangers, bison guides and a bison visitor centre set to be established, although jumping the gate is presumably discouraged for non-bison guests.

PORT Lympne bison have been moved to a park in Romania, as part of a bid to save the species from extinction.

They join an existing herd from Germany, Switzerland and Sweden and will be monitored with radio collars.

Adrian Harland, animal director at Port Lympne, said: “Following our involvement in the Aspinall Foundation’s ground-breaking reintroduction projects in Africa, it is great to be able to continue our conservation efforts here in Europe,.”

The project aims to re-establish a bison population and increase biodiversity in the region. Sebastian Catanoiu, Vanatori Neamt director, said: “After an epic journey, the bison were loaded off the vehicle at Chitele. They were in perfect health, grazing fresh grass and hay from the very beginning.

“The bison will stay in the pre-release fenced area, which contains a meadow and forest vegetation, for at least one month, where they can acclimatise to local conditions.”

The disappearance of the bison is a foundational story of the American West. In the 1500s, up to 60 million buffalo roamed the U.S. When Europeans arrived in the 19th century, the bison’s numbers almost immediately plummeted, from disease and unsustainable levels of killing. By 1884, only around 300 bison were left in the entire country.

But people realized there might be some value in keeping bison around. Congress protected bison in Yellowstone National Park, and a few other private herds were established. The species slowly recovered (though it’s still listed as near threatened).

Europe, it turns out, has a very similar story.

This story features European bison, a distinct species. Those animals once ranged across all of lowland Europe, but began a steady march toward extinction as far back as the 8th century A.D., when they went extinct in what is today France. The European bison managed to hold out for a surprisingly long time, however. The last known wild individual was shot and killed in the Caucasus in 1927.

Just as in the case of the American bison, however, that was not the end for the European bison. As the Guardian reports, around 50 individuals remained in captivity, and zoo keepers continued to breed them over the years. Beginning in the 1950s, a handful of countries, including Poland, Slovakia, Ukraine, Romania, Belarus, Russia, Lithuania and Kyrgyzstan, became interested in reestablishing their historic bison populations, the Guardian continues.

Just this week, another 17 bison were released in Romania’s Carpathian mountains, where they have not been found for at least two centuries. In total, around 3,200 animals now live in the wild in Europe.
Read more: http://www.smithsonianmag.com/smart-news/europe-has-its-own-bison-species-came-back-brink-extinction-180951547/#irvHzILssa0KG7mi.99