Apparently one of the oldest forms of feathered bonnet is the “horned” bonnet. Typically, this consist of a buckskin skull cap covered with strips of ermine skin. Shaved bison or cow horns tipped with bunches of dyed horsehair and ribbons are attached at the sides, with bunches of split owl feathers beneath. In back, beginning at the wearer’s neck, is a long tail is red strouding with a single row of eagle feathers standing out from it, falling to the wearer’s heels. (Fig. 1).

There are several variants of this basic form. One has only twelve eagle feathers (a single tail) fastened to the red strouding trailer in the back (Fig.2). The feathers are attached, in rows of three, by loops made in the bases of the quills. Another form of the horn bonnet omits that trailer completely, utilizing long strips of ermine, which ball over the wearer’s shoulders instead (Fig. 3). A third, adopted by the Dakota from a famous Crow warrior killed by them in battle, is the same type as 1, but has four horns, instead of two, at the sides.

The horn bonnet was commonly used by chiefs and warriors of the various Missouri tribes encountered by Catlin in the 1830’s. Later, however, it seems to

have been gradually displaced by other headdresses, notably the flaring eagle feather bonnet, to be described below. Among the Dakota the horn bonnet, later came to be identified with a certain warrior society, the Strong-hearts. Though complete data are lacking, a similar restriction of its use seems to have developed among the Plains-Ojibwa, Plains-Cree, Mandan, Hidatsa, and Crow where the headdress also became associated with warrior societies which often served as camp police.

At the present time the horn bonnet is used by only a few individuals in the most conservative Northern Plains tribes, such as the Hidatsa, Assiniboin and Blackfoot. It has lost any symbolism it may once have had.

The fourth that James H. Howard was referring to, and the most common of what people think of when you mention a headdress or war bonnet, is the full feather, sprawling outward, or even straight up. Many of what you’d see in the movies. But those too, had great meaning and details that are not shown in the movies.

Earlier accounts of horns worn on the head.

I did some research before I started building this one.  I enjoyed my research and hope I did the history justice. 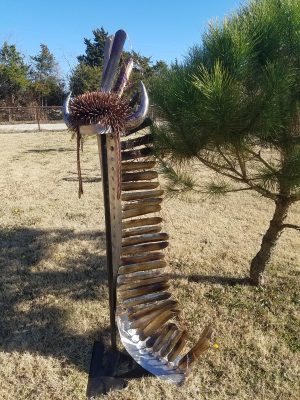 They were a very personal item to the wearer and were decorated with items that were important to them. The headdress was not a given, they were earned. The wearer had done something for the tribe whether it be courage, strength, or in his wisdom. Each feather was earned by doing another act, some just had a few feathers and others had a full-length dress at the time of the historic photos. They were also called a War Bonnet. I can’t imagine they were worn into a battle much, they were used in ceremonies whether of their own making or when they met with others of stature.

Trade fabric was very popular, its a red wool manufactured in Europe. The end of the fabric had white lines through it, this was covered or removed when making an item with the fabric, but the Plains people liked it and they used it in a way to show it off.

Some had bells, horsehair, feathers from a few different birds of prey, bison wool and hair, short-tailed weasel hides. The bison horns were usually from a cow, although I did see a set that was from a bull. I read they wanted to appear massive and scary to their enemy, like the bison. (Note to self: if they were not worn into battle, how could this be true?) It could be true if it was a way of building their tribe’s personal power within themselves.

Indians.org: Each time the warrior earned a feather, he would either wear it (but he only wore a couple into battle) or put it on a pole used for special occasions. Once he had collected enough feathers, they were then made into a headdress. Because each feather had a special meaning, binding them together in a headdress made that Indian headdress even more special. Only the men, closest friends of the warrior, were involved in making the headdress. The Indian chiefs also “earned” each of their feathers. The most prized of all feathers to receive for an Indian headdress was the Golden Eagle feather. Because the Indians saw the eagle as a messenger of God, this feather could only be earned through hardship, loyalty, and strength.

I’m sure there is plenty more to learn about the Headdress or War Bonnet, all in all, they each are a beautiful work of art.