After thousands of years, a herd of wild bison will be reintroduced to a nature preserve in the United Kingdom in spring of 2022, reports Damian Carrington of the Guardian.

The reintroduction will take place in a 2,500-acre area called Blean Woods in southeast England near Canterbury, according to a release. The $1.4 million “Wilder Blean” project, led by the Kent Wildlife Trust and the Wildwood Trust, will release a group of four European bison (Bison bonasus) into the woodland in hopes of restoring some of the ecosystem’s lost diversity, reports BBC News. Bison Nature’s Best Is Back

09 May 2010 – Bison Farm appeared on BBC One programme Countryfile 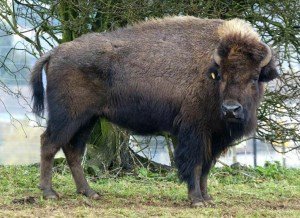 They are hardy animals and can stay outdoors in snow or in the hottest weather. Their diet is similar to that of cattle.

Bison are dangerous animals and as such are heavily regulated in the UK. We have had to acquire a zoo licence to keep them at Noah’s Ark Zoo Farm.

They are all part of the Cattle (bovidae) family which also contains sheep, goats, water buffalo, cattle, wildebeest and antelope. Genetic information has been lost in spreading so most of these species cannot now cross with each other. Yet Bison can cross with cattle. Bison originated in pre-historic times in Europe and Asia and spread to North America via the Bering Strait land bridge. It is the largest land animal in North America in recent times, and at their most numerous are thought to have been 30-70 million.

TWO cute baby bison have made their debut at Port Lympne Reserve.

The youngsters, one male and one female where born within days of each other and bring the herds’ numbers to 16.

The European bison was once widespread throughout Europe and parts of Northern Asia but by 1900 hunting for skins, horns and sport had driven them to virtual extinction in the wild.(https://www.kentlive.news/)

Port Lympne Wild Animal Park near the town of Hythe in Kent, England 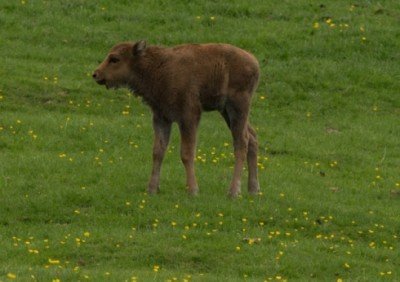 Keepers at Port Lympne Wild Animal Park are thrilled with a baby boom this month, including newborn bison and antelopes, fishing cat kittens, fossa pups and a baby drill.

Adrian Harland, animal director, said: “We’re all delighted with our spring baby boom and most of the youngsters are now starting to venture out and explore their new surroundings.”

In the hoofstock section, keepers are particularly pleased with the arrival of a baby female bison as the newborn boosts the numbers of the herd.

Bob Savill, head of hoofstock section, said: “It was amazing to be part of a joint reintroduction programme designed to reintroduce European bison to the Carpathian Mountains and the arrival of this female youngster means that we will be able to continue with this project in the future.”