I have often been asked, “If the Black Prairie really is a prairie, were there once buffalo around here?” 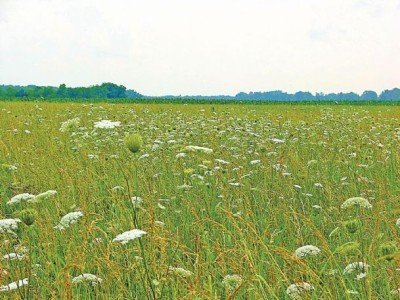 The answer is, yes, there were buffalo here but not necessarily because of the existence of the prairie. There were buffalo in the prairie during prehistoric times and into the early period of European contact, but they were also found in the forest areas, too. These were buffalo or bison which were living east of the Mississippi River and which were said to have been slightly smaller than the western buffalo.

Although there were buffalo in the Southeast, their numbers never came close to the huge herds that roamed west of the Mississippi River. Some of the earliest European accounts of what is now the United States mention Buffalo. In many of these accounts the buffalo were in forests, not prairies.

Early descriptions by the English settlers in the original colonies provide tidbits about the range of Buffalo in the east. A 1612 English account tells of seeing herds of “huge cattle” (buffalo) near the present site of Washington D C. It was reported that the Indians killed them for food. A British account from 1752 referred to western Carolina being crossed by many buffalo trails. In 1729, William Boyd surveyed the line between Virginia and Carolina and told of seeing buffalo but said they were rare.

In what is now Mississippi, Alabama and Tennessee there are even earlier mentions of Buffalo. Those references begin with the de Soto Expedition of 1539 -43. Several members of that expedition kept journals and within in those journals is a mention of buffalo. In the journal kept by “The Gentleman of Elvas” there is an account of a “cow hide” taken from Indians in what is now central Tennessee. There is also a description of Chickasaw Indians within the Black Prairie being decorated with paint and feathers and wearing “horns on the head.”

Writing in 1708, Thomas Nairne, an English trader, mentions the Chickasaw Indians (their main villages in the present day Tupelo area) wearing buffalo robes and hunting buffalo during a trading journey to Charleston, S.C. A 1740 French account mentions seeing “boeuf” in what is now northwest Mississippi.

In 1775 British trader James Adaire published a history of the American Indian. His account was based primarily on his experiences as a trader, mostly with the Cherokee and Chickasaw between 1736 and 1768. He also told of traveling with a group of Chickasaws to Charleston and being delayed along the way as the Chickasaws were “killing and cutting up buffalo.” William McIntosh, a prominent Creek Indian leader of the early 1800s, related that buffalo had been common in the southeast until “as late as 1774.”

In northeast Mississippi archaeological evidence confirms the presence of buffalo in the prairie. A Chickasaw Indian site north west of West Point has yielded three bison bones. Bones from the site produced a radiocarbon date of 1442 to 1535. A Chickasaw Indian village site in south west Tupelo has produced many bison bones. It is a site that was occupied from the mid-1600s to about 1720.

What happened to the eastern buffalo? It was a scenario what would be played out on an even more horrible scale by Euro-American hunters out West. In 1775 Adaire wrote; “The buffalo herds are now becoming scarce. The thoughtless and wasteful Indians used to kill great numbers of them (buffalo), only for their tongues and marrow bones, leaving the rest of the carcasses to wild beasts.”

Rufus Ward is a Columbus native a local historian. E-mail your questions about local history to Rufus at rufushistory@aol.com.