Gen. Sheridan was perfectly capable of conducting covert military operations while refusing to issue explicit written orders. Indeed, in 1873, he secretly ordered Colonel Mackenzie and his Fourth Cavalry to invade Mexico to crush the Kickapoos, Lipans, and Mescalero Apaches who were engaged in raids into the United States from their northern Mexican sanctuaries. sanctuaries. Sheridan issued secret spoken orders to Mackenzie in meetings held at Fort Clark and elsewhere. No record of these meetings was kept. The only source of information about what transpired is Lieutenant Robert G. Carter, Mackenzie’s adjutant. Carter did not attend the meetings, but he learned from Mackenzie what had occurred. As Carter told it, Sheridan ordered Mackenzie to invade Mexico and to conduct against the hated Indian raiders a “campaign of annihilation, obliteration, and complete destruction.” When Mackenzie requested more
explicit orders Sheridan angrily pounded the table and, according to Carter, raged: “Damn the orders! Damn the authority! You are to go ahead on your own plan of action, and your authority and backing shall be General Grant and myself. With us behind you in whatever you do to clean up this situation, you can rest assured of the fullest support. You must assume the risk. We will assume the final responsibility
should any result.”58

Three years later, in the face of renewed Indian raids from Mexico, the new commander
of the Department of Texas, General Edward O. C. Ord, sent American troops across the border in another secret operation. In justifying this invasion of Mexico, Ord assured Sherman that “Sheridan gave me quasi permission when I was in Washington, by saying why the devil don’t you do it.”59

With the many-sided assistance of the frontier army, the buffalo runners managed to destroy virtually the entire southern herd by 1879. As the animals dwindled in numbers in the late 1870s, a few hide hunters relocated to the northern range, then limited to western Dakota, northern Wyoming, and eastern Montana. After the surrender of the great Oglala Lakota war leader Crazy Horse and his followers to the army in the springe f 1877, the northern plains became appreciably afer for white interlopers.
But army commanders on the northern plains remained worried about Sitting Bull’s band, which had defied the policy of keeping the reservation Indians confined to their assigned lands by fleeing to Canada. Unable to persuade Sitting Bull to return to the United States and unwilling to antagonize the Canadian authorities by pursuing him into Canada, the army’s high command resolved to starve him into surrender
by depriving him of his commissary on the hoof-the buffalo. 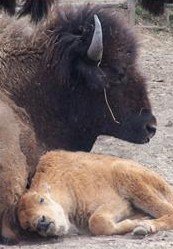 Midwest SOARRING (Save Our Ancestors Remains & Resources Indigenous Network Group). The group is a Native American, non-for-profit organization who has made it their mission to assist Native Americans in need, educate the general public, promote indigenous knowledge, recreate traditional Native style cultures, protect the remaining Native cultures, and reintroduce bison to Illinois (Midwest SOARRING 2011:1). Based in the Chicago Metropolitan area, the organization was instrumental in the creation of the GVKP and co-sponsored its first Powwow in 1998. Since then, Midwest SOARRING has been in attendance and visibly supportive of all the powwows held at the GVKP. They also still play a very active role in the maintenance of the site’s buffalo. Midwest SOARRING currently owns 23 bison that occupy the 30 acres owned by Bill and Misty Vermaat immediately west of the GVKP. Midwest SOARRING hosts a “Buffalo Shoot” regularly where the public can view and photograph the buffalo who now reside on the property (See Table 8 of Appendix H for related documents). This event is usually held in the fall. The commonly accepted association between Midwestern Native American cultures and the bison is maintained with this enjoyable and educational activity.

Many different people, organizations, and groups were instrumental in the creation, management, and success of the GVKP including the community of LeRoy and McLean County, the property owners (the Emmetts and the Vermaats), the Kickapoo people, the Grand Village of the Kickapoo Park Association, and Midwest SOARRING. Unfortunately, due to intercommunity issues, the Kickapoo people only were able to attend the first powwow on the grounds, but they are always in mind and spirit with park dealings. The interactions between these agents have been complex, but ultimately rewarding.