Hunting Tourism And Corruption In Belarus

Since the end of the 2000s, Belarus has become a destination for many hunt lovers from abroad. 40% of Belarus is covered with woods, which remain a natural habitat for many species of animals. Today, booking a hunting expedition in Belarus can be made online with a couple of clicks.

Poaching Bisons in Belarus
In 2013 Lukashenka said he was surprised with the amount of hunting tackle seized from poachers – one thousand rifles, 300 kilometres of fishing net, dozens of tonnes of meat and fish. In 2014 the authorities raised fines for poaching, but so far it is unclear whether this move will lead to a decline in illegal hunting.

Hunting bison, one of the symbols of Belarus, usually receives the most attention in the media. According to Belarusian legislation, bison are divided into two categories – the main gene pool and the reserve gene pool. The animals from the latter pool – usually old or ill – are not considered as listed in the Red Book (list of endangered species), and can be hunted according to a certain procedure.

Environmentalists oppose such norms, saying rare species should be protected regardless of their health or age. But Belarus officials have another rationale – the population of bison is growing and it needs to be regulated.

In recent years bison hunting involved many illegal cases. Usually, illegal schemes come from forestry officials, who make money by providing their hunting services for foreign tourists. In winter 2012, a Russian citizen killed a bison and wounded another one in the Valožyn district, while citizens of Lithuania killed three in the Chojniki district.

The guilty forester received only minor punishment for their transgressions. Earlier in 2009 an Italian killed a female bison at the Belaviežskaja Pušča national reserve, where hunting is forbidden. As it turned out, a local forester assisted him in getting to the protected area.

In 2011, the Presidential Property Management Department put a bison’s life up for an Internet auction, which caused a public uproar and an online campaign to save his life and forbid this practise from continuining. Plenty of people made fake bids in an attempt to prolong the life of the animal while the owners of the lot checked the identity of the bidder. In the end ,the campaign wrecked the lot and these kinds of bids have not again appeared in public.

While poaching on the side of citizens is still widespread, some cases of government officials involved in this illegal activity have also become public. One of the most striking instances occurred recently, when a nature protection servicemen worked in contradiction of their official duties.

At the beginning of December the Belarusian authorities informed the public of a quite a paradoxical corruption case. Officials from the nation’s wildlife protection agency were engaged in illegal hunting together with several police companions as additional cover. The group was poaching in the Vetka district of the Chernobyl area. Two of them were officials from the Homiel Regional Inspection for the Protection of Wildlife and the other five were officers from the Homiel Regional Police Department. 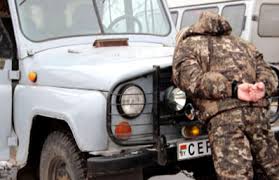 Arrest of poaching officials. Image: onliner.by The group was supposed to eliminate wild boars as a part of programme to combat African swine flue. Instead, the group killed four elk. The poachers moved in a car with gangster-style registration plate with the word “Serega”, the name of the owner, instead of the officially required numbers.

The car owner’s son turned out to be the deputy head of Homel Regional Inspection for the Protection of Wildlife. During their detention of the poachers, KGB officers even had to resort to pulling out weapons to stop the car.

The locals say that the poachers organised a hunting business in the area together with a Russia citizen who lives in a bordering town. The men hunted animals illegally and then sold the meat to local people. Now they have been fired from service and face up to four years in prison.

By strange coincidence, the same month on 29 December a senor Belarusian official himself became a victim of hunting. The judge of the Supreme Court of Belarus Victar Rakicki received fatal wounds from some of his hunting colleagues, “residents of the Minsk region”, as the Investigatory Committee reports.

Belarus retains its rich flora and fauna, and preserving it should be one of the government’s strategic goals. The authorities should control the local level of wildlife management more thoroughly, as most corruption cases occur there. Besides this, environmental groups from civil society should gain access to policymaking and oversight to help strengthen the public’s engagement with this important issue.

Vadzim Smok is a researcher at the Institute of Political Studies ‘Political Sphere’ based in Minsk and Vilnius.