Hidden away under frozen ground for nearly 10,000 years, an extremely well-preserved bison mummy is finally ready to give up its secrets.

In 2011, members of the Yukagir tribe in northern Siberia discovered the remains of a steppe bison (Bison priscus), an extinct ancestor of the modern bisonthat still roam the plains of North America and northern Europe. The almost perfectly preserved bison was transported to the Yakutian Academy of Sciences in Siberia, where researchers made plans to perform a necropsy, an autopsy performed on animals.
More photos
While other steppe bison mummies have been discovered over the years, none have been as well-preserved as the so-called Yukagir bison mummy, which was found with its internal organs almost completely intact, according to Olga Potapova, the collections curator and manager at the Mammoth Site of Hot Springs in South Dakota, who helped study the ancient mammal. [Photos: 9,000-Year-Old Bison Mummy Frozen in Time]

“Normally, what you find with the mummiesof megafauna in North America or Siberia is partial carcasses. They’re partly eaten or destroyed because they’re lying in the permafrost for tens of thousands of years,” Potapova told Live Science. “But the mummy was preserved so well that it [earned] a record for the level of its preservation.”

The researchers think the Yukagir bison died young, at about 4 years old, Potapova said. The lack of fat around the bison’s abdomen suggests the animal died of starvation.
The rest of the story,……for now.

Wolves are threatening a unique population of Canadian bison in Siberia

(Jan 2013) by the Siberian Times Reporter

The bison – or buffalo – are under special protection from hunters amid rising concern over wolf attacks. 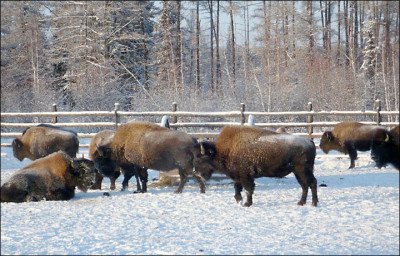 The threatened animals were airlifted to the Sakha Republic – also known as Yakutia – from Alberta in Canada in recent years.

‘Local hunters are guarding two nurseries that are a home to about 100 animals,’ said Andrei Popov, an official at the republic’s Nature Protection Ministry.

The wood bison, anyway a threatened species, were brought to Siberia to boost the animal’s long term chances of survival. Some 10,000 years ago, the related steppe bison roamed this part of sub-Arctic Russia. But the 800 kilogram creatures are powerless against attacks by packs of wolves.

Two bison calves born in 2012 are seen as particularly vulnerable to wolf attacks.

This region in Siberia – and others – have seen unprecedented attacks this winter by wolves on herds of both reindeer and horses. But it is clear the bison are also in jeopardy. A state of emergency was declared in the republic and teams of hunters are now engaged on a purge of the wolves with the government ordering a cull in the population from an estimated 3,500 to only 500.

Hunters are on financial incentives to slaughter the wolves.

A fall in polar hare numbers has led to wolves switching to other food sources, say zoologists.

The bison were flown in to Sakha by a heavy Russian transport aircraft between 2006 and 2011.

The aim is for the population to become self-sustaining and then to release them to the wild.

‘Bison haven’t been present in that part of the world for over 10,000 years’, said Todd Shury, a Parks Canada wildlife veterinarian involved in the bison relocation in 2011.

This is taken from the Bison Producers of Alberta, Canada, Bison Centre

History of the project

The proposal to test the feasibility of establishing a productive grazing ecosystem in the taiga is the product of collaboration between Russian, American and Canadian scientists. It would involve reestablishing an assemblage of large grazing herbivores, including wood bison and indigenous Siberian horses that would coexist with resident moose and caribou populations in a fenced area in northeastern Siberia. It is possible the Siberian tiger may eventually be introduced to fill the ecological role of the extinct Pleistocene lion. The large ungulates proposed for the park have been successfully reintroduced in other regions of the Holarctic. For example, bison and muskoxen have been successfully re-established in the Yukon, Northwest Territories and Alaska. Fifty Siberian horses were released at the project site in 1998.

The area designated for the project is located near Cherskii, on the Kolyma River, 100 km south of the Arctic Ocean. It is a 160-km2 scientific reserve, owned and administered by a non-profit corporation, the Pleistocene Park Association, consisting of six ecologists from the Northeast Science Station in Cherskii and the Grassland Institute in Yakutsk. The reserve is surrounded by a 600-km2 buffer zone that will be added to the park once several species have been reestablished.

The process of restoring some of the species that were extirpated, at least in part as a result of human activities, has already begun in parts of Siberia. In the last few decades sable, caribou, muskox and horses have been successfully restored to parts of their former range in eastern Siberia. Reestablishing bison in the region could be another step in an on-going effort to restore wildlife and ecosystems in the region, and is analogous to historic efforts to restore and conserve wildlife in North America. The Russian Federation and the Sakha Republic (Yakutia) support the project because of its potential to restore and protect the environment and because it may eventually provide socioeconomic benefits for the people of the north. Support for the project stated in the Canadian Wood Bison Recovery Plan (Wood Bison Recovery Team in press) and the Government of Canada has indicated its support. Protocol agreements have been prepared on animal health certification and donation of wood bison from Canada’s captive breeding herd.

The Pleistocene Park project is an experiment designed to evaluate the effects of herbivory and other relationships between ungulates and the northern environment (Zimov et al. 1995). Although available evidence indicates that the most recent form of bison to occupy Siberia was morphologically similar to wood bison, additional work is required to clarify taxonomic and phylogenetic relationships between bison in North America and Siberia. Dr. A. Cooper with the ancient DNA lab at the University of Oxford has undertaken this study. The Wood Bison Recovery Team (in press) has recommended that the release of wood bison to the wild in Siberia be conditional on finding that the Siberian Holocene form is clearly related to the North American Holocene form.

Wood bison have achieved modest recovery in Canada and are no longer threatened by imminent extinction. Further recovery is limited by disease, habitat loss, and the distribution of commercial bison ranches. Reestablishing wood bison in additional areas in Canada, including the northern Yukon and the Lower Mackenzie Valley, in Alaska, and possibly in Siberia will enhance the global security of the subspecies. Reintroductions will contribute to ecological restoration in these regions and create opportunities for bison to play a role in the culture and economies of northern peoples as they did in the past.

Siberian Window on the Ice Age
Sakha – also known as Yakutia – is a huge Russian province in eastern Siberia, a place of large distances, long histories, and big ideas.
Sergei Zimov’s is one of the biggest.

“Next year or two: bison from Canada, then musk ox,
then eventually we will have 20 mammals per square kilometre,” he says.
July 2007

Northeast Science Station (Russia)
From Wikipedia, the free encyclopedia
Coordinates: 68.73987°N 161.3999°E
Kolyma River
The Northeast Science Station is an Arctic research station located in Chersky, Sakha Republic in Northeast Siberia, and is used as a year-round base for international research in arctic biology, geophysics, and atmospheric physics. The station also houses the administration of the Pleistocene Park, a local experimental wildlife preserve of 160 km2 where director Sergey Zimov is restocking the area with reindeer, horses, moose, bison and musk oxen, which he believes were previously abundant, but exterminated by unsustainable hunting. Zimov hopes to also introduce native predators such as bears, wolves and Siberian tigers when the animal population is high enough. His grandest vision is the DNA recreation of the Woolly Mammoth from an abundant supply of long-frozen carcasses.
Named after Russian explorer Jan Czerski, Chersky is sited on frozen Pleistocene carbon. The sediments here are made up of 50% ice, and 50% loess, which is a windblown sediment – the carbon content of loess deposits is five times that of a rainforest floor. During each annual melt between 2 and 5% of the stored carbon in the loess deposits is lost.

The Large Herbivore Network, I found as a great read for the re-introduction.