Old-Man-Coyote (isa ka-wuate) (Supreme Being) showed people how to make fire; he took dried buffalo chips and decayed wood and drilled till the friction produced a fire.

Crow Chief Plenty Coups described the mood of his people to his biographer, Frank B. Linderman: “[When] the buffalo went away, the hearts of my people fell to the ground.…After this, nothing happened. There was little singing anywhere.”

Plenty Coups (otherwise known as Aleek-chea-ahoosh) (1848 – 1932) was a Crow chief and visionary leader. He allied Crow with the whites when the war for the West was being fought, because the Sioux and Cheyenne (who were opposing white settlement of the area) were the traditional enemies of the Crow. Plenty Coups had also experienced a vision when he was very young that non-Native people would ultimately take control of his homeland (Montana), so he always felt that cooperation would benefit his people much more than opposition. 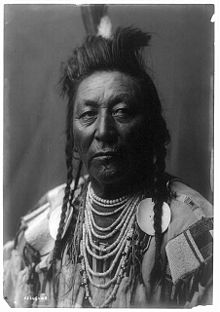 One of his famous quotes is: “Education is your greatest weapon. With education you are the white man’s equal, without education you are his victim and so shall remain all of your lives. Study, learn, help one another always. Remember there is only poverty and misery in idleness and dreams – but in work there is self respect and independence.”

He very much wanted the Crow to continue as a people and their customs and spiritual beliefs to carry on. His efforts on their behalf ensured that this happened and he led his people peacefully into the 20th century.[1]

He was the principal chief of the Mountain Crows, or the Apsáalooke, of the Crow Nation.

SARPY CREEK  Kill Site— About the time Christ was born and Roman legions marched on much of the known world, hunters honed by millennia of experience trapped a snorting, terrified herd of bison in a narrow drainage near what is now Hardin.

As they systematically killed and processed hundreds of animals, boiling and breaking the bones to retrieve the marrow, these prehistoric people had no notion of the archaeological and political fracas that would arise 2,000 years later.