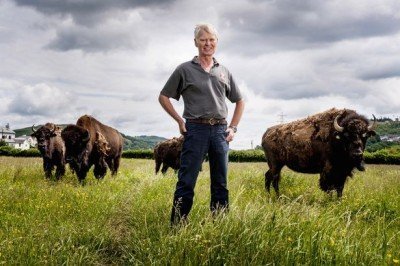 Lord Newborough started farming organically in 1989 after his dad died. Now the operation of more than 100 people sells organic meat to some of the world’s best restaurants, as well as stocking its farm shop.

The farm sees the animals from field to plate, with most of the stock bred on the farm, fed on the farm, going to a local abattoir, then its butchers.

But it’s not the easy option, says farm manager Gareth Jones, who took us on a tour in his suitably dusty Land Rover.

He said: “What’s special here is we have total control over the animals, from birth to slaughter.

As we crossed over the old bridge, the ancient stone walls of the castle rose up around us. It was like stepping into a postcard—I couldn’t quite believe it was real. I could imagine myself on horseback in medieval times, clopping over cobblestones and looking up, marvelling at the thickness of the walls and the height of the turrets. Then I looked at the river below and saw the sprinkling of yachts, and it brought me back to the present day. Instead of a horse, my trusty steed was a hired car, and, while the Unesco World Heritage Site of Conwy castle remains standing in all its magnificent glory since it was completed in 1289, today’s town has burst its fortifications and spread prettily up the green hills beyond.

My friend Sam and I hired the car in London, as we wanted to get a glimpse of the British countryside for a few days after a longer visit enjoying the urban splendours of the British capital. Of the UK’s four countries (England, Northern Ireland, Scotland and Wales), Wales is the least familiar, despite being only a few hours’ drive from the capital. While South Wales is in closer reach of London, and is more well known as it is the home of Wales’ capital city, Cardiff, North Wales remains somewhat of a hidden gem. The charm of its countryside has not been overlooked, however, by discerning Britons through the ages.

Its most recent world-famous inhabitants include Prince William and Kate Middleton, who made their home on Anglesey, a picturesque island in the most northwesterly corner of Wales, before the birth of their son. William and Kate, now the Duke and Duchess of Cambridge, are likely to inherit the title of the Prince and Princess of Wales, which usually is given to the heir apparent to the British monarchy. The title now rests with Prince Charles, and was bestowed on the late Diana. Prince Charles has made significant impact in his work as environmentalist, particularly championing organic produce, and it was with this in mind that Sam and I began our Welsh tour.

Rhug Estate is 12,500 acres of glorious countryside owned by Lord Newborough. Its farm started organic conversion in 1998 and is now fully certified. The farm grows a variety of organic vegetables, but is particularly famed for its meat, which includes a herd of Pedigree Aberdeen Angus cattle, Norfolk Bronze turkeys, Rhug Brown chickens, and three flocks of sheep.

More surprisingly, Rhug also has a more-than-40-strong herd of bison.

“They’re every bit as majestic as they seem in cowboy movies, aren’t they? They look a bit out of place in this genteel, British landscape,” said Sam, as we gazed at the herd.

“Ah, but did you know that the bison has been here much longer than cows? Our bison came from a large herd of North American bison in southern Ireland. Bison from America pre-date cattle in Europe,” said one of the farm staff, Gary. “See that bull over there? He’s called Rambo,” he added with a chuckle.

Bison is the most popular meat sold at the Rhug farm deli, and it’s on the menu at The Bison Grill. I tried the bison burger for lunch. The twinge of guilt I felt at eating the animals I had just admired dissipated after the first, delicious bite.