Poland helped save the European Bison

Greenpeace had gathered almost 9,000 signatures online by Monday afternoon on a letter asking Prime Minister Beata Szydlo to stop the plan. The opponents say Europe’s largest mammals, which live in old-growth forests in northeastern Poland, are endangered and protected by law, and a symbol of Poland’s nature.

There are over 1,500 bison in Poland, mostly living freely in state-owned reserves but also on private farms.

Environment authorities have allowed the hunting of 10 bison in the Borecka forest before April, saying the herd there is too large and threatened with tuberculosis. With 15 calves born in 2016, the herd has 111 animals, while it should be around 95, authorities say.

They say limited hunting allows for a controlled elimination of weak animals, while earning funds for fodder and other care for the herds. Some sick bison have been shot in recent years in other regions in Poland.

Paid events are regularly organized in Poland for foreigners who want to hunt deer, wild boar, hares or other small wild animals.

We’d been hiking through deep snow all day with the mercury well below zero, not an uncommon occurrence during winter in eastern Poland. Still I was sweating, covered in several layers and walking with greater strides than I was used to. We stopped once for lunch, taking our repast on a snow-covered log, eating our sandwiches and drinking greedily from our flasks, the tea still piping hot. All strangers until the day before, we chatted, laughed a little, then followed the trail onwards through the edges of Białowieża Forest.

On a path flanked by thick woods, I first spied our quarry. When she appeared, far away between the long verticals of bare trees, I could hardly believe she was there. She was a ghost, a specter haunting this winter forest. Her horns were prettily curved, her face slender, her whole 400 kilogram (880 pound) mass framed by the trees. She eyed us with that wariness only prey species have, a super-abundance of caution, and if she had run we would have easily lost her amidst the forest. But she didn’t flee. Instead she stood still, puffs of breath emanating from her nose, for a few minutes. It’s a moment I will never forget: a continent’s megafauna in the flesh.

European bison running across a trail in Białowieża Forest. Photo by: Lukasz Mazurek/WildPoland.com

European bison (Bison bonasus), or wisent as they are also called, very nearly became real ghosts. Instead, the last half-century has marked an incredible comeback story. The species—the biggest land animal in Europe—has gone from total extinction in the wild in 1927 to over 5,000 bison today, including 2,300 free-ranging animals. And one of those was the wild female I saw in Poland on that cold winter day.

The Zubr or European bison Photograph by Alamy 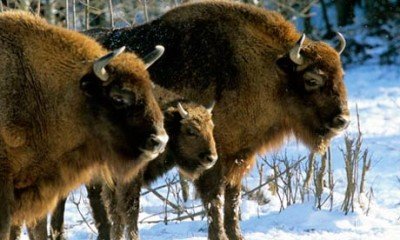 Primeval Poland: where the bison roam
In Europe’s last primeval forest, on Poland’s border with Belarus, experts are fighting to protect the zubr, or European bison

Even teetotal travellers to Poland are likely to stumble across Zubrowka vodka. It comes in a bottle with a distinctive label featuring a bison, zubr, and a blade of buffalo grass, supposedly urinated on by one of these magnificent creatures. But few visitors bold enough to try this national firewater will be aware of the precarious existence of the European bison, or realise that they can actually see them in the wild.

Conserving bison is not just about protecting a national symbol of Poland; it is linked to the survival of Europe’s last primeval forest, the 8,000-year-old Bialowieza, which straddles the border with Belarus. Around 16% of the Polish part of the forest is a national park and home to about 470 of the animals.

The bison is Europe’s heaviest land mammal, weighing up to 800kg. They are naturally shy – and experts want to keep it that way – but it is possible to see them.

Tourists can visit the protected primeval area of the national park, a Unesco world heritage site, though only if they book a guided tour. It’s worth a trip: the forest teems with life – wolves, elks, stags, lynx and a great variety of birds – and it’s a haunting experience to wander among its ancient trees. I have seen them there myself, and it’s an incredible experience if you are lucky.

The easiest place to spot them should be the hay meadows on which they feed, on the fringes of the forest, which you can visit under your own steam. Conservation efforts (part-funded by the EU) to expand the area the bison live in and bring them out on to the hay meadows to feed in autumn/winter (and not rely on artificial feeding) are increasing opportunities to see them, though in summer they tend to stick to the forest. An easier solution is to visit the large semi-natural enclosure, or “show reserve” near the village.

Ironically, the primeval forest survives because of hunting. Polish kings and Russian tsars were fond of hunting bison and maintained a small population. But during the first world war, bison were hunted to near extinction for food by German soldiers and locals. In 1929 a captive-breeding programme started, and in 1952 the animal was reintroduced to the forest.

Poland Wants Bison to Multiply, but Others Prefer Subtraction

A German prince is leading an effort to bring back the European bison, Europe’s largest land mammal, in Bad Berleburg. The animal almost went extinct in the early 20th century. 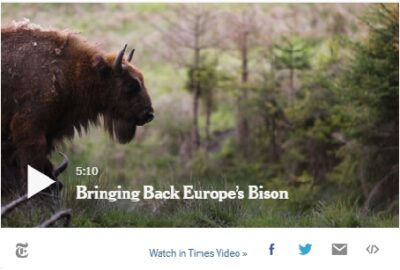 “I think we have gone close enough,” said Michal Krzysiak, who is part of a 23-member team overseeing this sprawling park’s European bison herd and is its only veterinarian. “We may scare them away, or they may charge.”

The two bison — among the 1,500 or so here in Bialowieza, the largest concentration of the European variety in the world — took turns lowering their heads to the thick grass and ripping at it with their rough, gray tongues.

Piotr Otawski, Poland’s deputy minister of the environment and chief nature conservator, announced a plan to codify and streamline government efforts to protect and grow the country’s herds of bison, an effort that might seem as uncontroversial as a government action can get.

Yet many farmers see the bison as a hazard to their fields and crops. The officials in charge of the country’s national forests do not always welcome the idea of more such creatures in the wild. Some business interests worry that too many new environmental rules will hobble the country’s economic expansion.

Even those who support protecting the bison cannot agree. One group of scientists thinks there are too many of them in some places and chafes under government regulations that prevent culling. Another group says the problem is not too many bison but too much human interference in their care.

“People are the biggest problem,” Dr. Krzysiak said. “By far.”

the stars of the park are the European bison, one of the great environmental success stories of postwar Europe, which have become symbols of the Polish nation.

“They are a very charismatic species,” said Rafal Kowalczyk, the director of the Mammal Research Institute on the park’s edge. “I would say they have become iconic. Many Polish companies use them in their logos.”

Protected in royal hunting enclosures, of which Bialowieza is a surviving example, first by the kings of Poland and then by the czars, the animals were hunted for food during war after war, retreating deeper into the forest, until the last wild one fell to a hunter’s bullet in 1919 here in Bialowieza. The European bison (Bison bonasus), cousins of the American variety, survived only as a handful of individuals, mostly in zoos in Berlin and elsewhere across Central Europe.

But beginning in 1951, Poland’s Communist government — as part of its campaign to reinvigorate the country after the war — began an audacious campaign to revive the species and reintroduce it into what was believed to be its favored habitat, the thick forests of the Polish borderlands.

Within a few decades, the herds had grown to more than 1,000 specimens, an astonishing resurrection. Today, more than 5,000 bison live in captivity or wild herds here in Bialowieza, scattered across a few other areas in Poland and gathered in relatively smaller numbers in France, Germany, the Netherlands, Romania, Ukraine and a few other countries.

“It is a very sexy story,” Mr. Otawski said.

But it is not enough.  (read more)