Gigantic remains of elephants have been found in a new railroad cutting in the Department of the Charente, France. Besides two tusks, one of the extraordinary length of 9 1/2 feet, there are elephants molars and bones, remains of mammoth, teeth of rhinoceros, bison and hippopotamus, and a large number of flint instruments. The discovery of human relics with remains of such antiquity is very unusual.

The Connexion French News and Views

July 2019, Nineteen head of American bison escaped their enclosure and had wandered off to an area that is known for hikers. Not thinking they had any other choice the police thought it best in the interest of safety to shoot all the bison. They brought out 7 shoots to surround the herd to avoid a stampede and it was done.

“Dominique Muffat-Meridol, the owner of the estate from which they escaped, condemned the decision in an interview with RTL, saying that the bison had escaped before and returned without problems. He bemoaned that he will be charged with the cost of the ranger operation.

Muffat-Meridol added that the herd’s meat would not be sanctioned for human consumption as they were not killed under sanitary conditions.”

https://www.domainedelasasse.com/  Domaine de la Sasse, near Megève in the Haute-Savoie.

I have 60 American bisons for meat production in France since 2003. I am selling fresh meat and by products all in France.

Update: The Bisons of Périgord have ceased to exist, but the activity continues in the nearby surroundings since it is the SCEA the Autruche Périgourdine that took over. The Bisonnades, this great feast which brought us all on the last Sunday of July, will also be held by Mr. Gérad Gadeau, the buyer.

We would like to extend our warmest thanks to all our customers and all the people
who have allowed the bisonnades and this great adventure. The Family Soulié

At the beginning of 2017, new arrivals rather hairy, appearing straight out of the era of Cromagnon, came to share the booty. And yes, it is indeed bison that have arrived at the Ostrich Perigourdine ! And they rather seem to like it, quietly flourishing alongside our limousine cows and ostriches . It must be said that it is very easy to please on a farm like ours, where the animals graze the grass at will and consume cereals produced here, respecting a reasoned agriculture . 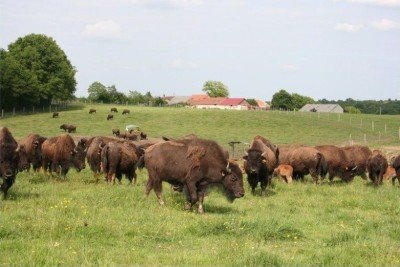 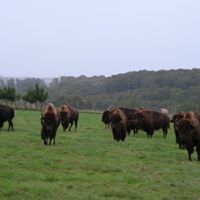