The Indians had encamped in the grove not long before our arrival, in many of the frames of their lodges were still standing, some of them seeming to have been but recently abandoned. The frames were made of poles, stuck in the ground, the tops being bent over and fastened together with pieces of rawhide. Some had both ends of the poles driven into the ground, the middle being bent up in forming a half moon. Over these frames the Indians had stretched skins of wild animals, pinning them to the ground with small wooden pegs, and in these houses they had lived, completely sheltered from wind and rain.

The shape of an Indian wigwam depends entirely upon the owner’s taste. He builds round, conical, oval or peaked, according to his fancy.

The most popular form of Lodge is tall and peaked, like a Sibley tent, but I have seen men square, wedge shape, and many half round, like a wagon sheet set on the ground over its bows.

The war lodges resemble great kettles turned upon their mouths.

Coming out to an open place among the trees, I saw a little valley without timber, but plenty of green grass, and within one hundred yards of us a herd of black tailed deer were grazing. We fired a dozen shots, and Nelson, my guide, had the good fortune to bring down a fine buck.

It was on our way out to the Republican I had an adventure, which I shall not soon forget.

One evening I had ridden in advance of the column two or three miles, with a few soldiers, to look for a camp. We had found the desired place, and were about to unsaddle, when a calveryman, who had been some distance ahead, came back with his hat full of ripe wild plums.

I inquired where he had got them, and on his replying, “A little way up the canyon,“ I mounted my horse and rode off in the direction indicated, taking no man or arms with me.

No idea of going far from camp, but must have missed the place, and kept on nearly a mile looking for the plum grove.

At last I came to a thick patch of bushes, and sitting on my horse began to gather and eat the fruit. A slight noise attracted my attention, and looking up I saw an Indian on a pony, not more than fifteen feet distant.

He, too, was gathering plums, and we espied each other at the same moment. It is hard to say which of the two was most astonished or frightened. I hallooed at the top of my voice, and the Indian, putting with to his pony, fled up the valley at full speed.

As soon as a bend in the canyon hid him from view, I clapped spurs to my horse and never let up until I reached the camp. It taught me a lesson, and I have never since gone hunting wild plums without arms.

In one place we found a large burying ground. It was in a grove of timber, and the bodies were laid up in the trees. Under a large limb I picked up a skull in the grass, and looking overhead saw a scaffold, on which lay a dead Indian, wrapped in his blanket. Other bodies were nearby, some enclosed in buffalo robes, others in furs, and some in bark coffins, bound round with strips of raw-hide.

Many were laid to rest in the simplest manner, but few were gaudy with red and blue flannel.

One old fellow had tufts of feathers at his head. Some of the bodies were very old, but several seem to have been buried quite recently. One old Indian rested in the forks of a tree near the ground, and his body had been fixed up with great care, indicating he was a chief. He had lain on his scaffold a long time.

The robes and blankets about him were rotten, the scaffold was falling to pieces, and his fleshless head protruded from his grave wrappings. Touching the head with a stick, it dropped from the backbone, and fell to the ground with a thud.

As it lay there, with its eyeless sockets, the white cheekbones gleaming in the sunshine, and a broad grin on the fleshless mouth, I could not help thinking of the lines on poor Yorick, and I said: “Perhaps he, too, in his day, was a fellow of infinite jest.”

A little further on, I saw an Indian baby that had been carefully put up in bark, and swinging to a limb. It’s a little coffin was lashed about with rawhide, and it was suspended with thongs of the same materral.

Some attempt had been made to ornament its singular grave by tying strips of red and blue cloth around its coffin, and among the branches of the tree.

Poor little Indian baby! The side of it made me feel sad, and I thought of another little baby sleeping in the green graveyard far away among the mountains of Pennsylvania. I thought, too, it was the darling of some fond, though savage and tawny skinned mother, who, perhaps with her own hands had laid it to rest.

To-night she would dream about it in her distant prairie home, and again it would nestle on her bosom. Remembering my own little birdlings in their eastern home, I reverently uncovered my head and left the spot.

Next day I found the coffin of the baby had been cut down, it’s body turned out on the ground and all the trinkets taken away. I endeavored in vain to find out the soldier who committed this ruthless act, and, had I discovered him, I certainly would have punished him very severely, for I was justly very angry about it. In the evening, the doctor – a smart German, named Gneisdorf – came to me with some skulls he had gathered in the woods and tried to explain them.

He said one of the heads was that of a young girl, certainly not more than seventeen years of age when she had died, and who had been dead at least twenty years. Then he went on to give me his reasons for such an opinion, all of which seemed very good. Next he showed me the skulls of an old man and woman, and one of a person who, he said, must have been dead for over fifty years.

Gen. Bradley, who was in advance, sent me a note to say he was approaching the Republican River, and that the scouts reported the country beyond full of herds of buffalo, antelope and elk. I naturally felt anxious to get forward. – [Golden Days]

The Doom of the Bison

Turf, Field and Farm
…..1881 Bison History.That the American bison, or buffalo, as it is more familiarly termed, is doomed to extinction in time is evident: but that this result will be “necessary evil” is generally acknowledged among settlers in the Far West. The vast herds the bison that only a few years since roamed over the Western plains afforded wild sport and a large income to the hide-hunters: but as a offset to this it should be remembered that the buffalo is one of the chief sinews of war with the Indian tribes. Deprived the red man of buffalo, and he cannot, during midwinter especially, carry on a successful raid. From the bison he obtains his provision, robes and covering. Nothing so harassed and weakened Sitting Bull and his band, when driven over the Canada border, as the absence of buffalo in that region. When the last herds become finally annihilated, nothing remains for the Indian but a semi-civilized and agricultural life. Holding this in view, the extinction of this huge nomad of the plains may be looked forward to, if not with satisfaction, at least with resignation by the sportsmen of the land, and especially by the frontiersman who have suffered so much at the hands of the Sioux and other warlike tribes. At best the bison as a game animal possesses barely the qualities of endurance, size and stubbornness – bearing no more comparison to the elk and moose then does the mule to the thoroughbred. 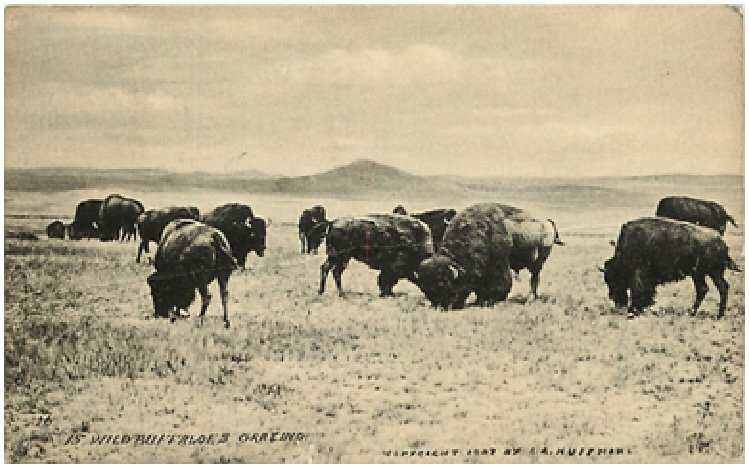 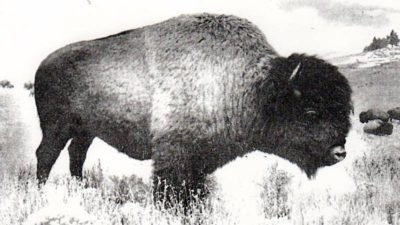