Antwerp Belgium, It is the oldest animal park in the country, and one of the oldest in the world, established on 21 July 1843.

Since its foundation, the park has been controlled by De Koninklijke Maatschappij voor Dierkunde van Antwerpen, a society originally called Société Royale de Zoologie d’Anvers (The Antwerp Royal Society for Zoology). This also became the popular nickname for the zoo “De Zoologie”. The initial objective was to encourage zoological and botanical sciences. The first director was renowned zoologist and botanist Jacques Kets (10 November 1785 – 1 February 1865). He accepted this position on one condition: a museum had to be built to house his nature-historical collections. This building was inaugurated in 1844 by H.M. KingLéopold I. The predicate Royal was added to the name of the society on that occasion.

Throughout the years, it has encouraged wildlife preservation through activities and exhibits on a recreational, educational, scientific, and cultural level.

In its early years, the size of the park grew from less than 3.9 acres to more than 26 acres. Notable buildings from that period are the Egyptian temple (1856) and the antelope building (1861) in Oriental style, which now houses the okapis.

After World War II, the animal park was turned into a model zoo which conformed to new and modern scientific, educational, cultural and aesthetic standards. The animal compounds were enlarged with more light. Buildings from this period include the primate building (1958), the big jubileum complex, established on the occasion of the 125-year anniversary together with the nocturama (1968), which houses thenocturnal animals. The jubileum complex houses birds of prey and the sea lions. In 1973 a brand-new compound for reptilians was built and in 1978 a new building for smaller species of monkeys. The older primate building was renovated in 1989. To support its educational mission, the zoo started with group tours and special educational programmes called zoo classes in 1969. Around the same time, planetarium exhibits were installed.

On 1 January 1983, the animal park was classified as a monument. Ten years later, its 150th anniversary was celebrated. In 1997, Vriesland (Freezeland) was opened. It houses subantarctic penguins and Alaskan sea otters. In spring 1999, the elephant compound was expanded. In 2003, a lot of animals, including hippos, Malayan tapirs, and a number of swamp birds received a new home in Hippotopia. 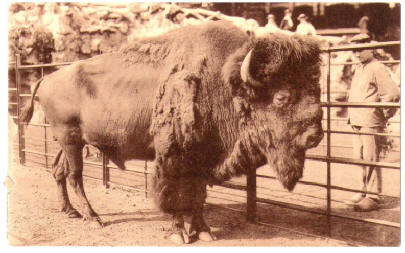 On Loan from the Galerii

Home to a herd of American Bison.

Meat main resource of Indian tribes, the buffalo was reduced to a few hundred individuals during the conquest of America by the white man in the nineteenth century, before then be protected in national parks and gradually raised in farms and private ranches.

Bison supports both harsh winters that sunny summers and simply poor forage living outside (homeless necessary) in large spaces where he can unleash his agility and speed. While a bison can reproduce until the age of twenty years and over (veal +/- 25 kg each spring), males that are not used for breeding are slaughtered to two years to weight 500 kg.