How North American Bison Ended Up in the Swiss Alps

The mammals in Geneva’s outskirts are now iconic in the country.

Today, Girardet owns a herd of 150 bison, and 35 to 40 of those are butchered every year. Calves are born every spring, he says. Behind the wire fence where he stands, a young, light brown-tinted calf nuzzles on its mother. Girardet—who is tanned and lean, with a mop of salt-and-pepper curls—extolls on how bison are easier to care for than cows. They are sturdy, healthy wild animals that rarely get sick, and don’t have to be corralled for winter, either. Bison eat grass in summer and hay in winter, as opposed to cows, who are often fed grain, corn, or soy to fatten them up.

It may not come as a surprise to learn that many meat connoisseurs believe that bison cuts are much tastier, more nutritious, and higher in omega-3s than their beef counterparts. “This is simply because grass is high in omega-3s,” Girardet explains. “As herbivores, grass should be their sole nourishment. Corn, soy, growth hormones, and antibiotics should be out of the picture.” 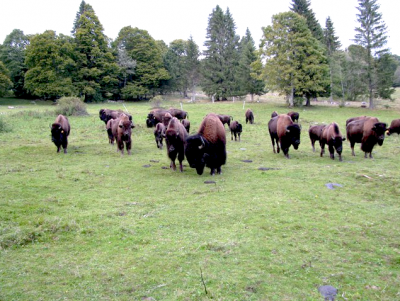 Christian Lecomte, who owns the Bison Ranch in Les Prés-d’Orvin, about 100 miles north from Geneva, bought several animals from Girardet shortly after they first set their hooves on Swiss soil. At first, Lecomte set out to diversify his offerings and become more competitive in what he felt was a saturated market: Sure, his cows produced a lot of milk, but so did everyone else’s cows. But given his location in the mountains, and the fact that he had plenty of pasture, he thought breeding bison would work well. Lecomte’s herd is smaller than Girardet’s—he has 15 female bison, which bear 12 to 15 calves a year.
But over the past 25 years, Lecomte’s bison have also become a full-fledged tourist attraction. People travel from all over the world to see them roam, and to taste bison meat. The restaurant on Lecomte’s farm serves a wide range of bison dishes, including bison filets, entrecote, and fireplace-roasted steaks. For those who want to take some bison home, he sells bison salami and bison terrine.

Michel Prêtre, of Jura Bison, located about 130 miles north of Geneva, began raising bison more recently. Back then, it was more precarious to raise cows, given the threat of an impending epidemic. “There were a lot of problems due to the mad cow disease,” he notes. So he sought alternatives. He brought 13 bison over from Geneva in 2004, and later six more from the United States. Despite their might and wild temperament, he believes that bison are simpler to care for than cows. “It’s easier to raise bison because they don’t need as much care and maintenance as cows,” he notes.

His farm is popular not only with tourists, but also with local schools, which organize frequent visits. Prêtre sells about half of his meat to local restaurants and distributors, and uses the other half on his farm. During summer barbecue season, he serves steaks, roasted bison sausages, and various tasting selections, as well as bison burgers for kids. People enjoy bison meat so much, he says, that it’s hard to keep up with demand.

Girardet says. “Every bovine should pasture in a spacious grass field, without being fattened in feedlots or undersized paddocks,” he says. “We consider ourselves lucky to be raising such amazing animals, which underwent no selection or genetic manipulations from the hands of men.”


Switzerland, A herd of bison makes for an unusual sight on the green pastures around the small village of Collex-Bossy, in the canton of Geneva.

Visitors do double takes when they first see the burly, hump-backed creatures grazing in the fields not far from Geneva’s airport, against the snow-capped backdrop of the Jura mountains and the Alps.

But the bison have become an ingrained, if unconventional, part of the village’s agricultural scene.

While still far from being a mainstream item in supermarkets, bison meat has earned a local reputation as a tasty, low-fat alternative to beef.

And a small but growing number of breeders across Switzerland are now raising the wild animals, originally native to the North American prairies.

They are following in the footsteps of Collex-Bossy farmer Laurent Girardet, 53, who launched a pioneering initiative more than 20 years ago.

In 1990, Girardet decided to import ten bison from Alberta, Canada with the goal of raising them for meat, a first at the time for Switzerland. Now he has more than 130 of them, supplying two local butchers and several gourmet restaurants that take all he can provide.

“I always had a passion for things from North America,” Girardet tells swissinfo.ch, explaining his motivation to launch the venture.

In 1995 in was reported that many Swiss farmers dismissed the bison ranchers, thinking them crazy. But the ranchers who liked the American Bison, joined together and formed the Swiss Buffalo Raisers Association.

The “Swiss” buffalo are purchased from vast American ranches in the American West. Strict government quotas restrict imports to small numbers each year and herds are small compared to the American farms. Girardet’s farm, near Geneva, has only 55 animals, but he hopes to start making profits on meat sales in about five years after building up stock numbers through a breeding programme. Land is expensive in Switzerland, but the buffalo don’t need a great deal of attention. They feed on grass in the summer and cereals in the winter. It can cost up to $US 3,000 to purchase a buffalo and import it from the United States.

Having been hosting cows and heifers for 20 years, the Domaine des Colisses du Bas needed a diversification of its production.

Thus in May 1992, five female bison arrived from South Dakota, joined in 1993 by a male. The herd increased in the winter of 94-95 with the arrival of six young (two males and four females) from Belgium but from American parents.

The first births took place at the end of June beginning of July 1995. The breeding was started.

Today, farming has a about 50 bison , one half of births each year .

The bison at the zoo Basel, there have been three times coming in May. A fourth Bison baby is still expected. So many pups there has never been at the Basel Zoo in a year.

Father of the pups is a born in Zurich in 2003 Taurus, as it is stated in a press release on Wednesday. He joined 2009 Bison group in Basel Zoo, which currently is next to the bull and the offspring of five cows.

Basel Zoo holds since 1939 bison. For three years the group has grown steadily, as it is called on. 2013 presented the Zoo the attitude of Scottish Highlanders and advanced instead the Bison-conditioning.Previously, the group consisted mostly of a bull and two cows with their pups.

Bison feed on grasses, leaves, bark, moss and lichen. Males are around 1,000 kilograms, females 550-750 kilograms. Pups are weaned from their mothers about half a year.

Exact figures for the number of bison in Switzerland are hard to come by, although estimates range up to 500, including 200 reproducing females.

Federal Veterinary Office: “The federal government does not keep national statistics on the number of such animals because this is the responsibility of the cantons.”

Bison fall into a category of wild animals raised for meat in Switzerland that includes red deer, fallow deer, wild boar, elk and ostrich, among others. A federal regulation on the protection of wild animals requires farmers raising such animals to be authorized by the canton. The regulation requires a qualified veterinary surgeon to regularly check on the health of the animals. An “independent specialist” is also required to show that the animals are enclosed in a proper manner with sufficient space.