European and American Bison in Russia

–By Imperial permission, a bison hunt was recently organized in the neighborhood of Balostock, in Russia, and two bison were killed and forwarded to St. Petersburg. There are considerable herds of those animals in the wild forest districts known as White Russia, and lying between Balostock and Litovsk. 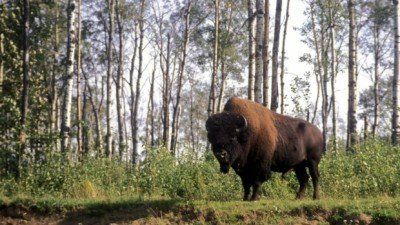 Republic of Sakha (Yakutia) Wood Bison Transplant In 2007, 30 wood bison from Elk Island National Park were transferred to Lenski Stolbie Nature Park in the Republic of Sakha, a northeastern Republic in the Russian Federation. This past winter, the transplants were transferred to a second release site in the Tympynay region of the Sinyaya Nature Reserve, which will be their eventual release site. Both Parks Canada and the Canadian Wildlife Service selected this site during a field trip to Sakha last summer. The wood bison is the closest living relative to the extinct steppe bison (Bison priscus). Both come from the taiga region, and reintroducing wood bison reflects the interest in Sakha of “rewilding” the Pleistocene megafauna.

Elk Island National Park will send a second shipment of bison to Russia this year as part of a conservation project.
Thirty wood bison will be sent in December to the Republic of Sakha, also known as Yakutia, where biologists are attempting to re-establish a population.
The republic’s rugged and largely forested landscape already holds moose, caribou and elk. But the steppe bison that used to roam that area died out about 5,000 to 6,000 years ago. Canada’s wood bison are the closest living relatives of the steppe bison, and the Russians asked the Wood Bison Recovery Team at Elk Island in 1997 for their help.

Elk Island staff were keen to participate, partly because a geographically separate population acts as a safeguard to protect the species as a whole.
They agreed to donate 15 males and 15 females, but the Russians had to pay for transportation. A Sakha diamond company called Alrosa stepped forward with the necessary cash in 2006.
Elk Island will also donate this year’s batch of 15 males and 15 females, said Archie Handel, a resource conservation and public safety specialist with the park.
The first herd seems to have done fairly well. All but three of the original 30 are alive. Last year, the cows gave birth to 10 calves, Handel said. There is no word on how many calves were born this year or in previous years.
The bison were shipped as yearlings. Most don’t reproduce until they’re two years old. They also tend not to reproduce the year after they are moved.
Two of the bison died shortly after the move: one female bison was somehow injured during transportation and had to be euthanized and a male was found dead in the woods. It looked like the death was sudden and quick, with no signs of struggle, according to a translated e-mail from a biologist in 2006. Handel said he does not know what killed that bison or the third one.
The first herd started off in Lenskie-Stolby National Park, which is on the southern edge of the republic. They were moved almost 1,000 kilometres north to the Sinya River area early last year. They are in a large holding pen for the time being but will eventually be released after they adjust. “That’s the area that’s been identified as pristine habitat, kind of similar to the area of Wood Buffalo (National Park). It’s open meadows with mixed forest,” Handel said.
The Russians asked for more bison to supplement the original donated bunch. They are worried about genetic viability and potential losses to predators once the animals are released, Handel said.
Elk Island usually participates in about one bison conservation project each year. In early 2010, 94 plains bison were sent to Montana for a project run by the American Prairie Foundation.
hbrooymans@thejournal.canwest.com
© Edmonton Journal 2010

Thirty more wood bison from Alberta have been flown to live in Russia as part of a conservation project. (Max Finkelstein/Parks Canada, via the Canadian Press )

Federal Environment Minister Peter Kent says 30 of the animals were transferred from the Alberta park, which is east of Edmonton, to the Republic of Sakha last week.

This is the third transfer of 30 wood bison to the Republic of Sakha in Russia. Elk Island National Park has done other operations of this kind in 2006 and 2011. Here, wood bison are being boarded in the Ilyushin Il-76 transport aircraft on Thursday, March 21, 2013, from the Edmonton international airport.

Parks Canada announces that Elk Island National Park has successfully provided an additional 30 wood bison to the Republic of Sakha, Russia, to support the introduction of the species. Here, some bison transferred on Thursday, March 21, 2013, from the Edmonton international airport.

APR 13,2020 18:56  The fourth batch of bison from Canada was delivered to Yakutia
Previously, 90 animals were brought to the region.

YAKUTSK, April 14. / TASS /. The fourth batch of 30 bison arrived in Yakutsk on Monday evening on a cargo plane with a direct flight from Canada. The animals were then taken to the Ust-Buotama kennel in Khangalassky district for quarantine, the press service of the government of Yakutia told reporters on Tuesday.

The project to re-establish a viable population of American forest bison, which is endangered in its original range, has been ongoing since 2006. In accordance with agreements between the Government of Yakutia and the Parks Agency of Canada, 90 animals have already been imported into the region in three batches. Two specialized nurseries were built for their adaptation: Ust-Buotama in the Khangalassky district and Tympynay in the Mountainous region. Also this year another nursery was opened in the territory of the Suntarsky district. Currently, in Yakutia, there are 220 forest bison.

“On the evening of April 13, 30 biennial bison, 15 females and 15 males arrived in Yakutsk airport by direct flight from Edmonton, Canada (the capital of the Canadian province of Alberta – approx. TASS), and then they were taken to Ust-Buotama nursery in three containers. Khangalassky ulus (district). We’ll note that all quarantine measures to counteract the spread of coronavirus on this flight from Canada have been carried out and the necessary permits have been obtained, ”the press service said.

“The bison will be quarantined in the nursery in Ust-Buotama. After that, scientific work will begin to look after them. The bison are in good condition, monitoring and feeding were carried out during the entire flight. They spent about 12 hours on the road. The bison carry the path quite easily, our Canadian colleagues prepared them for the flight, “Yakov Sivtsev, head of the Directorate of Natural Resources and Specially Protected Natural Areas of Yakutia, is quoted in the release.

The initial range of the forest bison included vast areas of taiga forests in Alaska and the provinces of Canada. According to scientists, forest bison lived on the territory of modern Yakutia in the Pleistocene era, simultaneously with mammoths. It is believed that the introduction of forest bison into the taiga ecosystems of Yakutia is more consistent with measures to restore the original fauna and is re-acclimatization.

MINSK, 20 December (BelTA) – A concept of the Belarus-Russia Union State program with the focus on the formation of an optimal areal of the European bison as a guarantee for its long-term presence (Roadmap for Bison) for 2014-2018 has been signed in Belarus, BelTA has learnt.

The program is aimed at the restoration of the species on the territory of the Union State. “The rare species will be resettled across Belarus and Russia as two big populations,” Director General of the sci-tech center for bioresources under the National Academy of Sciences Mikhail Nikiforov explained. Favorable areas will be selected for these purposes. “Creation of big stable populations will help make the bison an ordinary representative of the fauna in the future, with the possible use of the species for commercial purposes, i.e. hunting and excursion tours,” the official said.

According to Mikhail Nikiforov, a serious scientific effort is envisaged to improve the bison gene pool in new populations. “With the help of genetic research and selection of micro populations in different countries – Belarus, Russia, Germany, Poland and others, scientists will select bisons with different genetic parameters in order to breed the herb with a wide range of useful for the population genes,” Mikhail Nikiforov said. Selection centers will be set up in Belovezhskaya Pushcha and in Russian bison reserves.

The concept of the Belarus-Russia Union State program on the formation of an optimal areal of the European bison as a guarantee for its long-term presence (Roadmap for Bison) for 2014-2018 was considered and approved by the Union State Permanent Committee in April 2013.

European bison to return to Czech Republic
Prague Post
The Czech Landscape NGO has bought a herd of five European bisons, one male and four females, and plans to release them into the wild in the Czech Republic this year according to the group’s director, Dalibor Dostál.

It has not been decided yet where the European bisons will be released, but it will be probably in some former military districts.

The Czech NGO has gained the bisons on the basis of a contract signed with the European Bison Friends Society seated in Poland that coordinates rescue programs of European bisons all over across Europe.

The European bison became completely extinct in the wild after World War I. Thanks to an international rescue program and breeding in captivity, the number of European bisons has gradually started increasing.

At present, there are around 4,500 European bisons worldwide, 3,000 of which in the wild and in semi-wild conditions.

The former Czechoslovakia was heavily involved in efforts to rescue the species, Dostál recalled.

However, at present, the Czech Republic is one of the few countries in the area of the European bison’s original habitat where the species has not yet returned to the wild, Dostál said.

The project European Bisons’ Return to the Czech Republic aims to change this situation.

In this project, Czech Landscape cooperates with experts from the Biological Centre of the Science Academy (AV) and the University of South Bohemia, in České Budějovice, the AV’s Institute of Biology of Vertebrates in Brno, the Association of European Bison Breeders as well as other organisations and institutions.

The final decision on the location where European bisons will be released should be made by a new government, Dostál said.

In 2014, the current herd should enlarge by a further three bisons which, like the first three were, will be bought in Poland.

“The European bison used to be a natural king of Czech forests for centuries. Unfortunately, it ended up on the verge of extinction at the beginning of the 20th century and it survived eventually only thanks to the breeding in captivity,” said Evžen Korec, director and owner of Ekospo company, which donated most of the 310,000 Kč for the purchase of the European bison herd.

A bull at the bison farm along the Buotama River eyes a herdsman that is opening a bag of feed. The farm is a bi-national effort to reintroduce the wood bison to Yakutia in northern Asia. In 2006, 60 bison were shipped from Canada to Yakutia, and the herd has since grown to 170. The first release into the wild was expected within the year, a herdsman said in August.
Sue McMillin/Special to the Herald
We stopped near the junction of the Lena and Buotama rivers, where we walked inland about 20 minutes to a bison farm. In 2006, Yakutia and Canada began a joint program to reintroduce the wood bison to Yakutia. Canada sent 60 bison to Yakutsk, and the herd, now in two locations, has grown to 170. The herd manager said in August they would begin releasing the bison into the wild within the year.