……At Mobolets Farm in West Gotaland, (Sweden) We have American bison since 2004, imported from the U.S.. Today there are about 125 animals in the herd. They can be seen on guided tours with tractor and prairie wagon. The Farm is beautifully located with an amazing view over a great part of the lake Vättern and The Forest of Hökensås. Bison Farm at Gate has 138 acres of pasture divided into seven enclosures. The animals are moved from enclosure to enclosure to meet the needs of new grass. In the wintertime, the animals are fed with hay. At the farm breeding and meat production are the main activities. Breeding stock for sale is available. Please contact us for Further Information. All the pictures are from our farm. 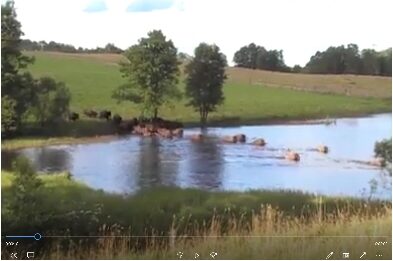 American Bison-Bengt Håkansson and Katarina Gabrielsdotter Håkansson run a company with safari, shop, and catering with the wild animals in the center.

Bengts Bison started their American bison herd around 2010, they now have 27 grown animals and 7 new babies. Located near Angelholm Sweden. They have started their own meat business and said it was doing very well and building. The cows were located locally and this year they added a nice bull from Denmark. They have some wonderful pictures posted on their website. http://www.tvangstorp.se/

When Bengt Håkansson got to know the owner of High Chaparall (Western Theme Park), he had to buy four calves from there. It was 2010.

Additional animals were purchased from another farm. And from having the bison as a hobby animal to watch, he switched to breeding and meat production. Today there are 55 animals, including breeding bulls Frank and Lindberg in the herd.

Bengt Håkansson is used to animal husbandry and previously had cows on the farm in Härninge, between Ängelholm and Åstorp. But taking care of bison is not like anything else.

– A completely different knowledge is required. One must understand that it is a wild animal that can not be handled. They can be calm and curious, but also totally life-threatening.

She and Bengt Håkansson got to know each other as they are both interested in and drive American cars. In 2014, they became a couple.

Now they run Bengts Bison together with breeding, bison safari with serving and sale of meat, skins and bison skull.

Welcome to one of Northern Europe’s leading breeding facilities for the conservation of the European bison, less commonly known as the wisent. The European bison is an endangered species. After the First World War, there were only around 50 individuals left in Europe. Today there is almost 3000 European bison living in various zoological and national parks. ∼

The European Bison in Sweden