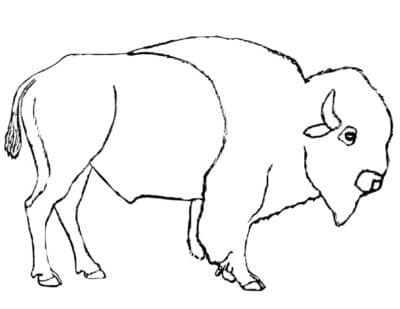 Free to download: Match the correct letter to the Part.pdf 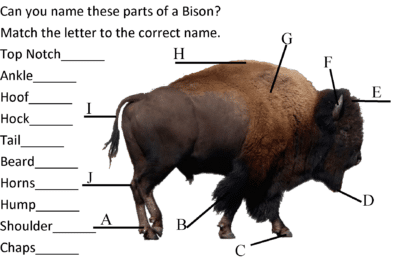 There now are several kids books out on the market, this was not the case just a short time ago. Teachers and States are getting their kids involved with bison and how they lived in history, contributed to the ecosystem, Natives, and new settlers. If there is anything you can’t find or would like to see, just shoot me a message and I will be glad to help.

Alphabet Animal Friends is a book about how animals relate to letters in our Alphabet. Much like American Indian lore considers animals as teachers that guide and encourage us, an animal species is associated with each letter.   The Elephant with its complex and unusual physique represents the entire Alphabet —  the ideal metaphor for how all twenty-six letters, each being unique, combine into a whole.
Alphabet Animal Friends is an e-book available online from  alphabetpenandink.com

For the older kids, Alaska Dept. of Fish and Game has put out a great Bison Quiz in a pdf.  Bison Identification Guide: 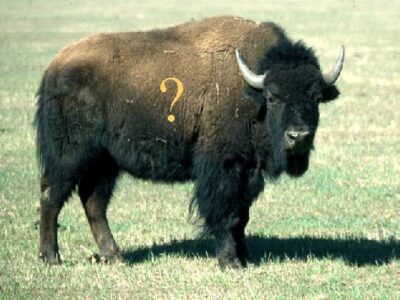 Do you know how to spot the difference?  Cows or Bulls and how old are they?

“Sometimes it is just not realistic to determine the sex of a bison. Take your time, be patient, get into a better
position, and utilize all the characteristics. Sometimes bison will gather in single sex groups. You will then lose your ability to compare relative characteristics between sexes. Don’t assume that because an animal is the largest out of the group that it is a bull, or that the smallest is a cow. Many bison of the wrong sex have been shot this way.”

The American Bison, is our ONLY native  grazer. They have been an integral part in the development of the early settlers and the Native Tribes. The Natives in the plain states relied heavily on the bison for food , materials for clothing, homes, and tools. While early settlers used them for food and a warm winters robe. Eventually they were wanted for their hides and tongues, which led to their near demise. Had it not been for a handful of private ranchers who had their own herds, they would be gone forever. With the historic ranchers and the help of W. Hornaday and President Roosevelt and several others, who started the creation of “National Parks.” The Government secured the land and animals from these ranches to keep them safe. All of the Bison we have today come from the actions of  those  people in history.

They are a huge part of the natural ecosystem. Providing ‘buffalo chips’ to the soil and critters. They carry seeds of plants and trees in their wool and stomach to other places. Birds use their wool for their nest. Some Birds like Cowbirds follow the Bison and feed off the insects they stir up and carry.

Buffalo Chips, provided fuel for fires on the woodless plains. Natives used them for an absorbent material in diapers, ceremonial purposes and fuel. Early settlers depended on them for fire fuel to keep warm and to cook. Buffalo chips also carry seeds from plants like grasses that the buffalo eat, and then they sprout and grow, wherever the buffalo leave it.