American Plains Bison located at the bottom of the page

Mr. Giles informs us that he shall at once send men from New York to construct the fence and fish ponds. The Smithsonian Institute has tendered its aid to the Association to procure, through Major Powell of the Colorado Expedition, specimens of live antelope, bighorn sheep, and black tailed deer, and arrangements have been made for securing moose from Nova Scotia, and elk and buffalo from the far west, at prices little exceeding the cost of transportation. It is expected that the buffalo will be merely an acquisition to the zoological department, through the successful experiments of Sir William Alexander, in his parks near Edinburgh, Scotland, where he has bred buffalo since thirteen years ago, prove that the idea is not chimerical. Once a year it is proposed to have a grand battue and barbecue, to last four days, at which time one buffalo will be turned out to grass and the tender mercies of the sportsman.

A very proud Mum at Kincraig! 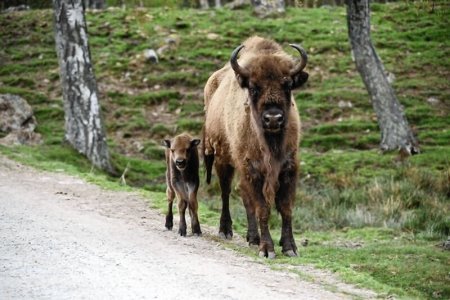 Keepers at Kincraig’s  Highland Wildlife Park are celebrating the birth of two European bison calves in its herd in the main drive-through reserve.

As the Royal Zoological Society of Scotland, who run the park, point out the calves will play an important role in the conservation of the species: “It is hoped that they will eventually be reintroduced into part of the species’ historical range in eastern Europe.”

The calves, one male and one female, were both born on May 13 to mums Glen Esk and Glen Isla. Keepers have yet to name the fluffy new-borns but they will continue the Scottish glens theme, in line with other bison born at the Park.

Douglas Richardson, Head of Living Collections, said: “The two youngsters are getting on well and will go on to play a vital role in the ex-situ conservation of this large species. Glen Rosa – a female that was born here 4 years ago – was transported to Romania in 2014 as part of the reintroduction programme. We hope to be transporting a larger group of our bison to Romania later this year.

European bison are similar in appearance to American bison, although they are smaller in size. Bison have a thickset body shape, short neck and pronounced shoulder hump. Bison previously roamed throughout western, central and eastern Europe, but by 1927 the species was completely extinct in the wild. The species has since been successfully reintroduced into the wild in Belarus, Poland, Russia, Lithuania, the Ukraine, Romania and Slovakia. The European bison is currently listed as Endangered on the IUCN Red List. 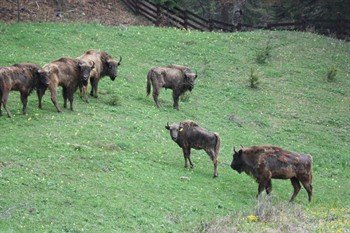 Call of the Wild Scottish bison selected for reintroduction project

A female European bison born and raised at Highland Wildlife Park, Kingussie, has been selected to return to the wild as part of a coordinated reintroduction project for a species that had become extinct in the wild less than 100 years ago.

Place this where you want the anchor 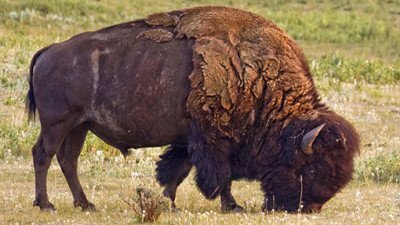 An award-winning herd of Scottish bison faces slaughter unless it finds a new home, say its owners.

Scott Shand and his wife Shelagh established their Caledonian Bison company at Muchalls, near Stonehaven, Aberdeenshire, in 2005.

Since then, the herd has expanded to more than 50 animals, winning the Grampian Food Forum Innovation Award in 2012.

But the couple say the venture hangs in the balance after a series of setbacks trying to relocate the herd of American plains bison.

The herd was due to move last year to the Ballogie Estate, between Banchory and Aboyne.

But the Caledonian Bison web site says the estate had a “change of heart and decided not to go forward with the proposed bison venture”.

The Shands then decided to invest “everything we had” in purchasing their own small holding. But just as they were about to move, they were told the land was no longer for sale.

Mr and Mrs Shand say they were given until March this year to remove their animals from the estate but face “unaffordable penalties” if the animals remain beyond April.

The couple have used their website and social media to appeal for anyone to get in touch if they have with facilities and ability to take the animals.

They say they need some 60ha of well-fenced land but any help is appreciated.

“This has left us absolutely backed into a corner,” the bison website says. “Unless we can find someone who can take these animals our only option is to slaughter the whole herd.”

It adds: “We have done everything we possibly can to try and save these animals. They are now condemned simply because we do not have any land.”

The Ballogie Estate was contacted by Farmers Weekly but declined to comment on the situation, saying it had no prior knowledge that details were to be posted on the internet.