All about bison leather – hides……….

Humanity has used animal hides since the Paleolithic, for clothing as well as mobile shelters such as tipis and wigwams, and household items. Since ancient times, hides have also been used as a writing medium, ie; parchment.

Long before Europeans came here, tribes were already trading among themselves, trading fruit of the hunts for farm products. Nomads offered bison hides, robes, fat and dried meat in return for vegetables and tobacco of the villagers. In the 1700’s with early explorers, the trade expanded. White mans goods for beautiful tanned buffalo hides. By the 1850’s the Americans were enjoying cozy, thick-furred buffalo robes for sled and sleigh, carriage and wagon, sofa and bed – even overcoats and  shoes, as snug as they were bulky. This gave way to a much more extensive trade in dry, raw hides.

1871 tanners in Europe and America had a new way of treating dry buffalo hides, and the business boomed. Most thickly furred hides were still tanned with the hair on. The rest of the hides were into fine leather. The British army, considered buffalo leather more flexible and elastic than cowhide. They replaced many article in a soldiers outfit.

The leather was also in demand for belting in the expanding machine industry. Although some say it was of no use for belting , harness or shoes.

The probable origin of the process of curing skins was simply that of cleaning and drying. Then use of smoke, sour milk, various oils and the brains of the animals themselves were found to improve the texture of the leather. Later it was discovered that the use of certain astringent barks and vegetables effected permanent changes in the texture of the skin, and stopped decay. This knowledge was processed by the ancient Egyptians, for engravings on their tombs depict the process of tanning. In China specimens of leather have been discovered in company with other relics that prove them to be over 3000 years old. The Romans used to leather that they tan with alum, leather and bark. The earliest  explorers in America found the Indians wearing skins prepared with Buffalo dung, oil and clay.

No improvement in the general method of preparing leather took place from the most primitive times until about 1790, when the use of lime to loosen the hair from the hide was introduced. By 1825 English tanners were attempting to introduce new methods by which the tanning process could be shortened. One of the pioneers in these experiments was John Burridge, inventor of the “barkometer,” and instrument for determining the strength of tanning liquors. Fifty years ago all leather was bark tanned; today nearly all is chemically tanned.

The first tannery in America was built in Virginia in 1630. Tanning was early encouraged in the colonies by laws that forbid the exportation of untanned leather.

The skins that form the staple of the leather manufacturing industry are those of the ox, cow,, Buffalo, horse, sheep, lamb, goat, kid, deer, dog, seal, hog, walrus, kangaroo and alligator. The leather production in 1900 amounted to $204,038,127.00. 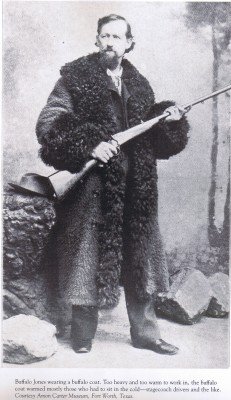 When taken to camp the pelts are laid in rows in a place known as “the hide yard.” They are spread out flesh side up, and holes are cut near the edges within acts or Tomahawk. If not pressed for time a knife may be used. One of the party that goes around with an arm full of pegs, and distributes them on the hides. He averages about 16 pegs to the hide. The skins are next stretched in the pegs driven into the ground. The hides remained there until they become as hard as flint. They are then taken up and sunned. After a day or two they are cramped or folded, flesh side in, like the leaves of a book. Next they are piled readily for market. Hides are taken in summer are sprinkled with poison to keep the bugs out of them. Thousands of hides are spoiled by the rains. Frequently the wolves get at them and tear them to pieces. Some hunters kill the animals all the year round and even slaughtering the cows with calf. Others condemned this practice, and will not associate with those who follow it. There are many professional terms. A ‘cripple” is a buffalo that has been wounded and is after word discovered and killed .A ‘spike” is a young bull. The best hides are tanned and reserved for robes. Others are made into leather. The coarser ones are turned into harness, being too porous for shoes.

After stretching hide out on a rack/frame, now the fleshing (removal of all larger fat and meat). Braining, you squish the brain (bone marrow oil can be added to help penetration in the thicker hides.) up in just a little water and heat it until it’s just warm, not too hot to handle. Then you rub it into the hide thoroughly (which has been soaking in warm water and then rung out until just damp). Any extra brain that is left is poured onto the skin, then you fold it in half lengthwise so that the fur is on the outside, then roll it up and let it soak for about 24 hours. After that comes the time-consuming but very important part of rubbing, stretching, and buffing until it dries completely. It takes a few hours even in hot weather. Stretch it this way and that and basically just work it around until finally, when it’s completely and totally dry, it’s soft and supple. The final step is smoking the hide, which coats and preserves the fibers, enabling the hide to stay soft after wetting.

While researching methods that I could try myself, I found this on a forum.

“A stiff deer skin was one day walking around from house to house through an Indian village, frightening everyone it visited. At last it went to the house of a man who was boiling deer’s brains for a vomit. He did not propose to be frightened by this mysterious skin out of his house, and therefore he poured the hot water solution of deer’s brains upon the stiff skin which at once softened it down, took away from it all power of motion, and flattened it to the floor. The people in fright had been shooting it with arrows. After it was softened they began to pull it and thus resulted the tanned deer skins.”

1709 Chamois Like brain tanning, produces a porous and highly water-absorbent leather. Chamois leather is made using marine oils (traditionally cod oil) that oxidize easily to produce the aldehydes that tan the leather to color it.

(late 1700’s?)Vegetable-tanned leather is tanned using tannins and other ingredients found in different vegetable matter, such as tree bark prepared inbark mills, wood, leaves, fruits, and roots. It is supple and brown in color, with the exact shade depending on the mix of chemicals and the color of the skin. It is the only form of leather suitable for use in leather carving or stamping. Vegetable-tanned leather is not stable in water; it tends to discolor, so if left to soak and then dried it shrinks and becomes harder. In hot water, it shrinks drastically and partly congeals—becoming rigid, and eventually brittle. Boiled leather is an example of this, where the leather has been hardened by being immersed in hot water, or in boiled wax or similar substances. Historically, it was occasionally used as armor after hardening, and it has also been used for book binding.

1858 Rose-tanned leather is a variation of vegetable oil tanning and brain tanning, where pure rose otto replaces the vegetable oil and emulsified oils. Rose-tanned leather tanned leaves a powerful rose fragrance even years from when it is manufactured. It has been called the most valuable leather on earth, but this is mostly due to the high cost of rose otto and its labor-intensive tanning process.

1858 Chrome-tanned leather, invented in 1858, is tanned using chromium sulfate and other chromium salts. It is more supple and pliable than vegetable-tanned leather and does not discolor or lose shape as drastically in water as vegetable-tanned. It is also known as wet-blue for its color derived from the chromium. More exotic colors are possible when using chrome tanning. The chrome tanning method usually only takes a day to finish, and the ease and agility of this method make it a popular choice. It is reported that chrome-tanned leather adds up to 80% of the global leather supply.

(The alum tan deposits the sulfates into the cell structure of the hide and it is retained there. Over the years humidity comes into play. Humidity is also introduced into the hide and the chemical compositions in combination with each other for H2SO4 or sulfuric acid. This formation ultimately destroys the hide)

This is a book I ran across that I thought held a lot of information about tanning hides, its free to download and even though it was published in 1912, it is still being reproduced in the 21st century. Its that good! Hides and Skins  -From The Animals Back to the Tannery Door.  Written by Specialist and Authorities in Several Departments of the Hide and Skin Industry.