…..In the early 1870s, Colonel Edward W. Wynkoop urged that the slaughter must be terminated, because it is one of the greatest grievances the Indians have and, to my personal knowledge, frequently has been their strongest incentive to declare war. Little Robe, the Cheyenne chief who recently visited Washington, at one time remarked to me after I had censured him for allowing his young men to kill a white farmer’s ox: ‘Your people make big talk, and sometimes make war, if an Indian kills a white man’s ox to keep his wife and children from starving. What do you think my people ought to do when they see their cattle-the buffaloes-killed by your race when they are not hungry?’ 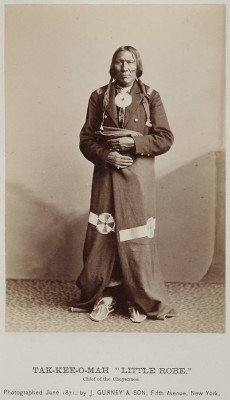 Little Robe (SKI’O MAH’) was born in 1828 in to the Southern Cheyenne tribe. He became famous in 1852 during a battle against the Pawnees in Kansas. He officially became chief in 1863. In 1867 he participated the treaty of Fort Larned and Medicine Lodge and in the same year, he also led a war party against Kaw tribe. He was also present at the battle of “Washita” (1868) where Black Kettle was killed; Little Robe replaced him and organized the defense of the village.

In March 1869 his village was discovered on “Sweet Water Creek” (Texas) by Col. Custer. A month later, he surrended at Fort Cobb and assumed the role of principal chief of the peace faction. In 1871 and 1873 he participated at two delegations in Washington, where he met the President Grant.

In the “Red River War” (1873-1875) he was neutral, but he didn’t want to leave his territory to the white breeders.
He never send his children to white schools like many others did. He died in 1886.