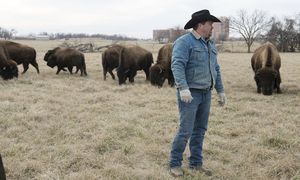 Chris Roper, Agriculture Director of the Quapaw Tribe, stands next to a variety of products sold at the new Quapaw Mercantile distribution center in downtown Quapaw. The distribution center opened last week and is located in the heart of Quapaw for customer convenience.

Quapaw Mercantile provides a variety of Quapaw Cattle Co. beef and bison products including ribeye steaks, beef bacon and bratwursts. The store is open from 8 a.m. to 4 p.m. Monday through Friday.

Chris Roper, agriculture director for the tribe, said the new distribution center recently opened and offers convenience to its customers.

“It’s more convenient for local folks because they won’t have to travel very far to get local products,” Roper said. “All of our beef is hormone free and all Angus. We don’t put any additives into the meat at all. Our bison is the same way.”

The Quapaw Cattle Co. has more than 150 bison and 500 head of cattle dispersed along 1,500 acres of land throughout Miami and

Quapaw. Their meat products are sold in Quapaw convenient stores located in Miami and by Downstream Casino.
Roper said the Quapaw Tribe currently serves its own meat products at their daycare centers, elder’s center and all of the restaurants inside of their casinos.

“We currently sell our beef sticks and our beef jerky in about 40 different retail outlets, which is always growing,” Roper said.

“We’re constantly promoting our products to grow that entity.”
Later in 2016, the tribe plans to build its own red meat processing plant located by Quapaw Casino and East 66 Road. The cattle company’s meat is currently processed at Four State Meat Processing LLC in Big Cabin, but the tribe hopes to start processing its own meat products by the end of the year.

“We have secured one grant for that already, and we have actively applied for several others,” Roper said. “We’ll be able to raise our animals, feed our own animals and process our own animals.”
Roper said they plan to expand the tribe’s processing, but it is based on demand. Last year, the tribe processed over 750 animals.

“That’s not bad, but we’ve slowed down the processing a bit this year,” Roper said. “As markets continue to open up, we’ll continue to expand our market area.”

“We want to be able to grow our own feed products for our animals,” Roper said. “Currently, we have to purchase all of that, which is a pretty large expense. We’re looking to produce our own hay and crops.”
/

More on the Quapaw Tribe of Oklahoma, visit their site.

GLOBE | ROGER NOMER Flanked by the Downstream Casino and Resort, Tom Hardcastle, agricultural manager for the Quapaw Tribe, checks on a herd of buffalo as they feed in one of two fields used for pasture. The tribe acquired its first 12 buffalo about two years ago. The herd now numbers 81.

QUAPAW, Okla. — When buffalo all but disappeared from the plains of Oklahoma in the the late 1800s, so did the meat source upon which so many area tribes depended.
But thanks to an initiative from the Quapaw Tribe of Oklahoma, buffalo meat will soon be back on the menu for Native Americans served by the tribe’s Title 6 Nutrition Program operating out of the tribal elder center in Quapaw. Buffalo, which has a texture and taste similar to beef, is much leaner and is considered much healthier to consume regularly. The first delivery of buffalo was made at the beginning of February to the elder center and to the O-Gah-Pah Learning Center where elementary age students will enjoy what was long ago their ancestors’ primary source of protein. Rhonda Weaver, Title 6 program director, said that the buffalo meat will appear on the center’s menu starting in March.
“Buffalo is nutritious and much healthier than over-processed meats that could go on our menu, and we are excited to put this into rotation for the tribal members’ diets,” Weaver said. “Some of our elders are facing diabetes and heart problems and providing a leaner choice, but allowing them to still have a great source of protein like their ancestors sustained on, will give them a healthy option while improving their quality of life.”

The elder center serves lunch five days a week to about 75 regulars at that location and sends out an additional 80 meals each day. Participants must be at least 55, but do not have to be members of the Quapaw. The meals are open to members of any tribe.
Weaver said that the buffalo will be used in a variety of dishes, including stews, meatloaf and bison burgers.

“The excitement isn’t only on our end, but for the people who eat with us,” Weaver said. “This is part of the tribal history and this is what they lived on.”

AGRICULTURAL PROGRAM
The tribe’s agriculture program is located and operated mostly on property near Downstream Casino Resort. About two years ago the tribe put a dozen buffalo in two herds on 360 acres, and the number has grown to 81 head now. The initial bison arrived from the Wichita Mountain Buffalo Refuge in Lawton and from Badlands National Park in South Dakota.
Earlier this month, the first two buffalo were processed by McFerron Meats in Nowata, yielding 800 pounds of meat.