<< Previous Next >> Lansing State Journal Lansing Michigan May 16 1928 Buffalo Weakens Fence The buffalo, or bison , a huge animal has left the marks of his residence on the fences surrounding the yard where he has been kept. Several metal bars supporting the fence have been bent out of shape where he has rushed against the fence. It is expected that a stronger fence will be necessary, as the one now is use may give way if he rushes against it where the weak spots exists. The young animal born this spring who has among his ancestors some … Read more

9,000-Year-Old Bison Mummy Found Frozen in Time In November of 2014 it was reported: Hidden away under frozen ground for nearly 10,000 years, an extremely well-preserved bison mummy is finally ready to give up its secrets. In 2011, members of the Yukagir tribe in northern Siberia discovered the remains of a steppe bison (Bison priscus), an extinct ancestor of the modern bison that still roam the plains of North America and northern Europe. The almost perfectly preserved bison was transported to the Yakutian Academy of Sciences in Siberia, where researchers made plans to perform a necropsy, an autopsy performed on … Read more

European and American Bison in Russia   The Buffalo Commercial Buffalo, New York Feb 16, 1882 –By Imperial permission, a bison hunt was recently organized in the neighborhood of Balostock, in Russia, and two bison were killed and forwarded to St. Petersburg. There are considerable herds of those animals in the wild forest districts known as White Russia, and lying between Balostock and Litovsk.     First load. 2006 Republic of Sakha (Yakutia) Wood Bison Transplant In 2007, 30 wood bison from Elk Island National Park were transferred to Lenski Stolbie Nature Park in the Republic of Sakha, a northeastern … Read more

Canada Bison  Canada Bison History Prehistoric Bison These bones belong to a prehistoric bison. The photo was taken by either myself, or my husband, at the Royal Tyrrell Museum of Paleontology, which is in Drumheller, Alberta, and is a fascinating place to visit. There were many different prehistoric bison species and I am afraid I did not write down the name of this one.       Sturgeon River plains bison population stabilizing Prince Albert Daily Herald The envy of bison stewards throughout North America, the Sturgeon River plains … Sturgeon River Plains Bison Stewards executive director Gord Vaadeland spoke … Read more

<< Previous  Next>> / / Wichita Daily Times Wichita Falls, Texas Jan 14 1913 New Herd of Bison of Interest to Scientists WASHINGTON –Government scientists in Washington displayed real interest in a dispatch from Winnipeg a few days ago, announcing that Harry V Radford, the American explorer had discovered more than 350 (? 850) wild buffalo in the Slave lake district of the Hudson Bay country. The wild buffalo of the American plains are gone and nothing remains of them save a few museum and zoological park specimens. Outside of the national zoological park in Washington, the Bronx Zoo, in … Read more

<< Previous  Next>> The Times, Pa., Jan. 21 1901 AMERICAN BISON ……Naturalist Declare the Animals Are Increasing in Number. While it is naturally in possible to obtain figures as to the exact number of American bisons that are now alive, it is not difficult to obtain approximate figures, and from these and other data which had been recently collected, European naturalist maintain that there are more bison alive now then there have been for many years and that the number of these animals will steadily increase if only do care be taken of them, says the New York Journal. ……About … Read more 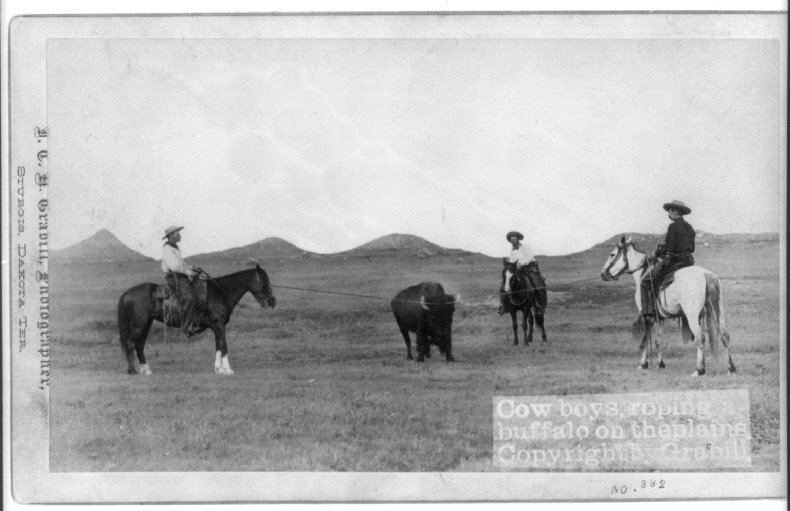 << Previous  Next>> / Waukesha Daily Freeman Waukesha Wisconsin Apr 2 1885 GRADUAL EXTINCTION OF THE BUFFALO GATHERING THE BONES OF THE COUNTLESS DEAD FOR COMMERCIAL PURPOSES The harvest of furs in the Northwest is about it ended, for the buffaloes are on the eve of final extinction. Hunters who are engaged in the business of hunting the buffalo for his hide are returning daily from the ranges on the north and south sides of the Yellowstone river, and report not a bison to be found in a country where they formerly roamed in myriads. Men who have hunted hitherto … Read more