Looking Out for Them

Southern plains bison have been blessed this year with unusual rains in the dog days of summer and lots and lots of grass. I have actually seen cool season prairie bloom, and cool soaking rains in August. My biggest message to bison owners is ‘don’t let your guard down – and be on the lookout’ (!) Lots of grass and lots of rain, means: lots of parasites. Having your guard up about the parasites is all about being on the lookout for how your animals are looking. If they are gaining weight and looking ‘bloomy’, you will have a great calf crop and go into winter. By now the vocalizations have begun, and if not, you need to check the nutritional reality of the herd. It’s also good to be leery of your bulls this time of year, because as they begin to vocalize, they tend the territory of the cycling female. If you threaten their right to that territory, accidentally or not, you are no longer safe. Personally, when I see a bull making rapid moves to head off a cow and hear him vocalize, I think how that scene must look the same as when Cabeza de Vaca first witnessed the great herds, in the southern plains by the way, in the 1500’s, and how lucky I am to witness it today – from my truck or a safe distance! It’s wild America on ranches all over this country, it’s cool [AND] it’s dangerous, so keep an eye out for the signs.

Speaking of keeping an eye out, the southern plains have a lot of wild diversity to offer. I am always busy telling people to be on the lookout for signs of health issues before they become critical to their bison.  But I am now adding, be on the lookout for what’s looking back! Steve Unger, a new and welcome addition to the bison community at 310 Bison Ranch in Jacksonville, Texas, sent me an email entitled ‘an interesting day’. Steve moved here from California and is doing a fantastic job of building a quality herd on his land. He embraces the hard work of ‘getting it right’ and/but – this day was a little more adventure than he remembered seeing in the Texas bison ranching brochure…

His words are the best:

The water exploded for a second, and the fight was on!  He fought him for a couple of minutes, and then said that he wanted to get a second hook near his tail (first one was close to his head) and asked me to take the rod. I love fishing, so I didn’t hesitate.  Gators, it seems, tend to lie on the bottom and simply stay there. They somewhat dig into the mud, and are impossible, or seem to be impossible to move. Quickly they had the second hook in him, and the tug of war was on.  I pulled real hard on this guy for about 30 minutes, and was running low on gas when we finally got a glimpse of its head. It was big! The guy who was not on a rod kept trying to throw a loop over its head, but wasn’t having much luck. My arms felt like jello, and I didn’t have the  strength to pull his head up again, so I switched poles with the guy who was holding the tail.  He got the head up, and this time the rope found its way around it gators head. Then they had him. We pulled him up the bank, and one guy jumped on its back, tied its jaws shut, and then tied his legs.

We all took a break for a few, then drug the beast around the lake, and got him into the bed of their truck. They measured him first though, and he hit the tape at 9 feet, 10 inches. They estimated his weight between 200 and 250 pounds.  He could have easily taken any of the calves, and even the adults if they went into the water, which they always do.  They were going to relocate him to a place where he wouldn’t bother anyone.  As much as I didn’t like that thing, I was glad I didn’t need to shoot him, and happy he’ll live out his days somewhere safe.  I now check all of the lakes daily for anything that may be looking back at me. 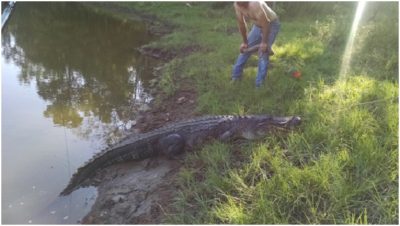 So, enjoy your bison and this great summer with all the grass, keep on the lookout for how their habitat is doing condition – but always watch for what’s look’in back!